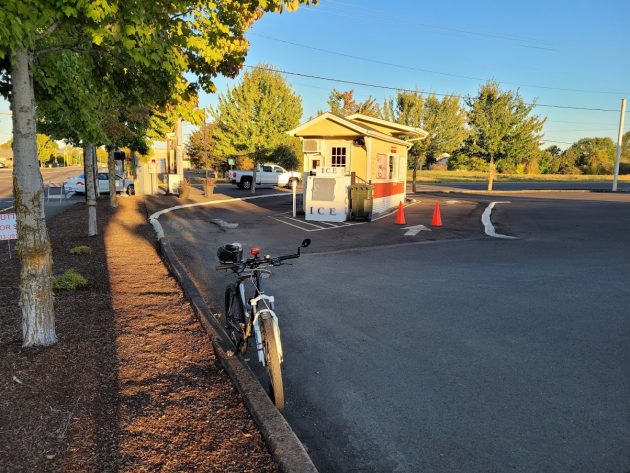 The Spirit Espresso at Queen and Geary on Monday night: The portable toilet is gone, for now.

The Albany City Council is ready to reopen the question of allowing portable toilets, at least in some cases, after a couple of independent small coffee stands were told to get rid of theirs.

In a nutshell, the issue is that Albany’s municipal code bans portable toilets as permanent fixtures. On Monday the council was told that the city’s code compliance officer had told two small coffee businesses they must get rid of the portables they had. One apparently did, but another didn’t, at least not yet.

Councilwoman Marilyn Smith brought it up. She said the owner of Spirit Expresso at Queen and Geary had contacted her to say that if that’s the law, the business would get rid of the portable toilet there. (When I checked after the council meeting, it was already gone.) But the owner wanted the council to know about it.

Spirit Espresso, the council was told, has an arrangement with the Wheeler Dealer store across the parking lot for employees to use the facilities. But the stand opens at 5:30, so it had the portable to cover the time before the store opened. The portable was locked, Smith said, so the public could not use it.

If I understood remarks by Mayor Alex Johnson, he knows of another coffee business that also faced enforcement of the no-portable law but was resisting. I didn’t hear him mention a name.

Councilor Matilda Novak thought it was reasonable for a stand-alone coffee kiosk to have a portable and wondered why the city acted in these cases.

“It’s in the code” came a chorus of other councilors. But the rules can be changed, the mayor said. He asked the city manager to come back with something — maybe a code amendment — that would allow exceptions to the portable ban.

“Will do,” Manager Peter Troedsson said. There were murmurs of assent among the councilors, meeting on Zoom.

In 2018, the city tried to enforce the toilet law against the First Christian Church downtown, which had set up a portable outside its building for the after-hours use of homeless people who came to the church’s free meal service. But eventually, in November 2019, after several meetings and discussions, the council granted the church a permit allowing the outhouse to remain.

Then and now, the ban seems odd because the city itself pays for portable toilets that are permanent fixtures at several city parks. If hooking up to the sewer system is impractical in parking lots where coffee or food carts set themselves up (as it is in parks), why not put up portables for people to use when they have to go? (hh)