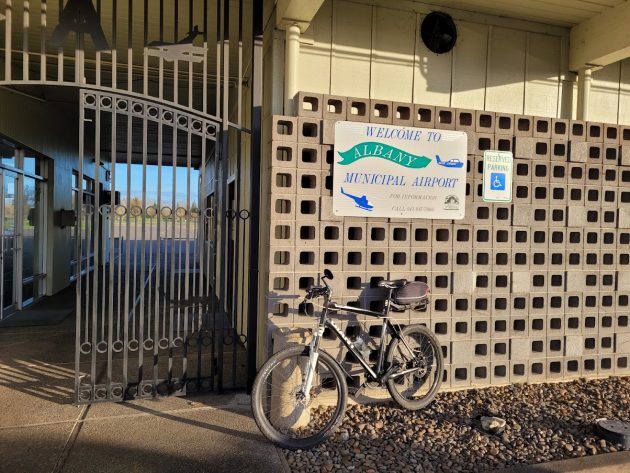 On Thursday afternoon at the Albany airport, which played an indirect role in Wednesday night’s council action.

There’s no more suspense, as far as the public is concerned, about the Albany City Council’s vote following an executive session Wednesday night to indemnify three employees against a potential damage claim. The move was in reaction to a possible lawsuit against the city over the crash of an ultralight aircraft last July.

The crash, in a Millersburg field on the evening of July 9, killed the pilot, Charles Kizer, and his passenger, Matthew Irish.

In response to my request, City Attorney Sean Kidd on Thursday afternoon gave me a partial copy of the claim nortice against the city. Such a “tort claim notice” is required before anyone can sue a government in Oregon for damages.

The gist of the notice was that the aircraft passenger’s widow, Elizabeth A. Irish, was asserting claims for damages against the city and “its employees and airport manager(s) Robb Romeo, Jon Goldman, and Chris Bailey.” As transportation manager, Romeo also oversees the airport. Goldman did so before he retired. And Bailey, now the public works director, used to oversee public works operations, including the airport.

The council’s indemnification meant they won’t have to hire their own defense lawyers if it comes to a lawsuit and they are named as respondents.

The notice was sent to the city by a lawyer in Lake Oswego for the firm of Krutch Lindell Bingham Jones PS. The firm also has an office in Seattle and says on its website it specializes in aviation cases and represents “family members of those who have died due to the negligence of others.”

Before the vote on the indemnity motion, Mayor Alex Johnson II recused himself without explaining why.

In a statement Thursday morning, City Manager Peter Troedsson wrote: “The council voted to indemnify city employees who are named in the tort claim notice based on the fact that they were acting within the scope of their duties. The mayor recused himself from the council decision because of a pre-existing relationship with the claimant.”

As the local paper reported in its story on the crash, the mayor had been close friends with Mr. and Mrs. Irish. Elizabeth Irish also was the director of the mayor’s campaign committee in the 2020 election.

Thursday morning the city at first rejected requests for the tort claim notice from me and the Albany Democrat-Herald, citing a public records exemption for pending litigation. After I talked with the city attorney, he released the summary to me and the paper as well.

Offhand it’s a hard to see any justification for the damage claim.  City officials have nothing to do with who flies from the airport, or with ultralights, or where they are flown. (hh)