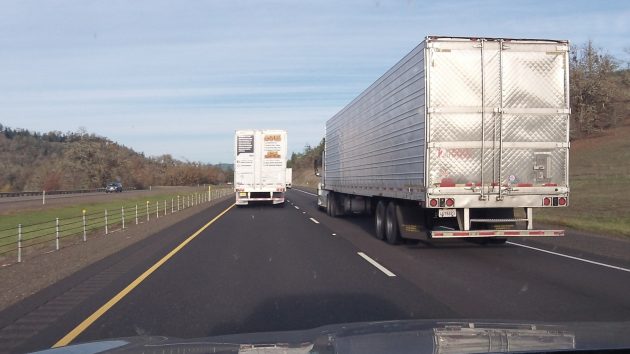 Trucks heading north on I-5 in Oregon on Nov. 10. Some in industry want bigger trucks.

In an unusual move, the Albany City Council Wednesday listened to a disembodied voice on the telephone asking it to oppose bigger trucks on the nation’s roads.

The voice belonged to somebody named Josh Collins, and if I heard right he was phoning on behalf of an outfit calling itself the Coalition Against Bigger Trucks. The city staff evidently had arranged for him to make his pitch without having to show up in person during an agenda segment called “business from the public.”

What he wanted was for the council to send a letter to Congress opposing, on the grounds of promoting highway safety and preventing damage to roads and bridges, proposals in Congress to allow longer or heavier trucks. The council had copies of such letters from the mayors of Beaverton and Salem.

As the voice went on and on, for maybe 10 minutes, the council silently listened and, in the end, took no action. Councilor Rich Kellum suggested looking into the issue.

Various changes proposed in Congress over the last few years would allow trucks to weigh up to 97,000 pounds, up from 80,000 pounds, and to be longer as well.

Oregon Congressman Peter DeFazio, D-4th District, whose district includes most of Albany, is chairman of the House Committee on Transportation and Infrastructure. He’s already had letters on the truck issue from others, including a group calling itself Americans for Modern Transportation.

This group is pushing for Congress to allow raising the maximum length of twin double trailers from 28 to 33 feet. This, they said in a letter to the secretary of tranportation, would “immediately improve the efficiency and safety of truck operations across the nation’s congested freight network.”

Taxpayers and travelers would benefit, AMT said, because longer trailers are more stable and less likely to roll over, reduce congestion and the number of crashes, and create more capacity while maintaining current federal weight restrictions.

Whether the council will take this up, who knows? But they might, considering how hard it is for drivers of big semi-trucks of currently legal size to negotiate some of Albany’s tight corners and narrow streets. (hh)

Councilors and other officials listen to a long-distance plea against longer and heavier trucks Wednesday. (Councilor Bessie Johnson sits just outside the frame on the right.)