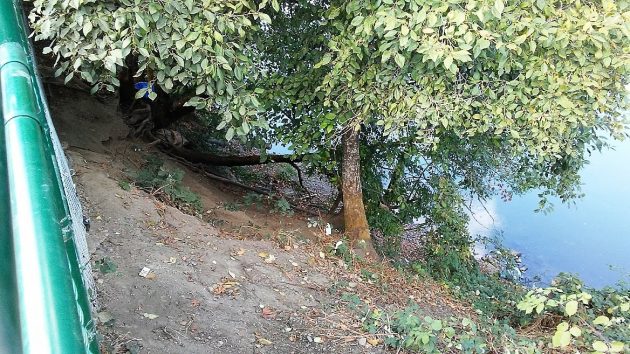 Upstream, the bank below the Dave Clark Path is just as steep as in the three tracts proposed to be donated to the city.

The developer of Edgewater Village wants to donate three parcels of riverbank to the city of Albany. Most of the land is too steep and dangerous to be used, so why would the city want it?

But the land’s essential uselessness is not why the city council on Monday turned down the donation totaling about one acre on the river side of the Dave Clark Path. No, instead the council worried that under a recent federal appeals court ruling on the homeless, the city could not charge riverside squatters with a crime, such as illegal camping.

So the members voted 5-1, with Ray Kopczynski opposed, to put off acting on the donation until the ruling by the Ninth Circuit, in a case from Idaho, is appealed to and decided by the Supreme Court.

Much of the discussion was about who — the Edgewater homeowners’ association or the city police — has the main responsibility to keep squatters from camping on the riverside strip or expel them when they do.

George Diamond, the Edgewater developer, said it makes no difference in practice. Whether it’s in Edgewater’s or the city’s ownership, they don’t want anybody using the riverfront because it’s dangerous and steep.

In a memo to the council, Parks Director Ed Hodney said the owner “has appraised the value of their gift at $420,000.”

If that’s the value, the donation presumably would have some kind of tax benefit to the donor, but at the council meeting Monday, I didn’t hear anybody ask about that. (hh)