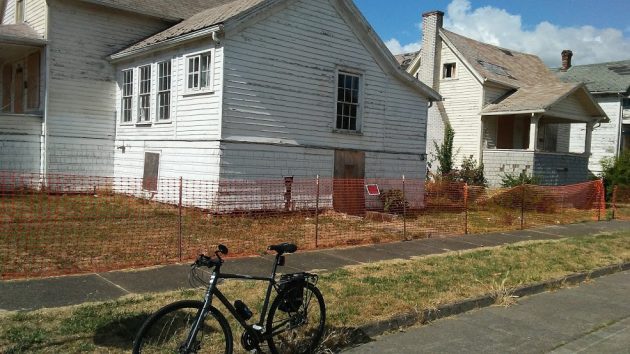 On Tuesday, orange safety netting and no-trespassing signs had gone up at the three houses.

Homebuilders Tina and Mark Siegner are free to file for a demolition permit on three old houses they own in the Monteith Historic District following an Albany City Council decision Wednesday night.

The council voted 4-1 to adopt findings to support its decision last October to allow the demolition. Dick Olsen voted no after arguing at some length that at least the corner house at Fourth and Calapooia be preserved as a good example of a pioneer house. The oldest of the three, it dates from circa 1858 and was built by a doctor prominent in Albany’s early days.

Bernadette Niederer, who had appealed the October decision to the state Land Use Board of Appeals, and Camron Settlemier asked the council to postpone the decision and reopen the case to hear more about why the houses should not be razed. But the council did not take their advice.

As ordered by LUBA when it sent the case back to the council for the adoption of adequate findings, Councilman Rich Kellum took no part in Wednesday’s discussion or vote.

The Siegners bought the dilapidated houses, condemned by the city and boarded up in 2017, in February 2018. After cleaning them of tons of garbage and vermin, they determined the houses were too far gone for a restoration to make economic sense. They intend to replace them with modern housing that complements the neighborhood.

Their next step is to apply for a demolition permit. Then, when their plans for new construction are ready, they’ll have to submit them to the Albany Landmarks Advisory Commission for a review of compatibility with the historic district.

So as much as these houses have been in the local news since the city evicted the homeless people quartered there by the Signs of Victory Mission, what happens on the property next will continue to be of public interest for some time — until any new construction is complete. (hh)