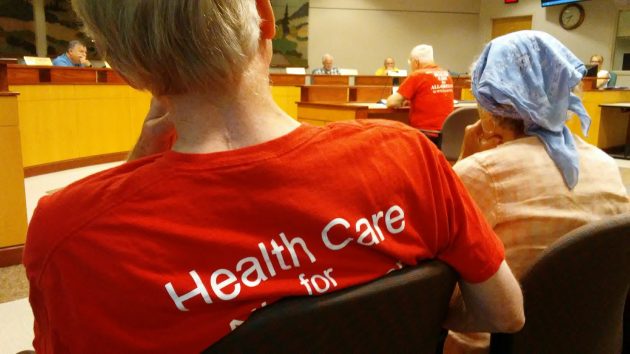 Ray Hilts talks to the Albany council as supporters of “health care for all” listen Wednesday night.

The Albany City Council waded into the health care debate Wednesday. It voted 4-3 to support a Democrat-sponsored bill to create a commission to design a single-payer medical system, one that covers everybody living in Oregon and is paid for by the state.

Members of a local chapter of Health Care for All Oregon, headed by Ray Hilts, asked the council to support state Senate Bill 770, which is pending in the legislature’s Joint Ways and Means Committee.

Konopa characterized the bill as creating a commission that would merely study the idea to see how and whether a single-payer health care system could work. “We need to know in Oregon,” she said. Several speakers from the audience made the same point, more or less: It’s just a proposal for a study.

Actually, if the bill becomes law, it “establishes the 18-member Universal Health Care Commission to design the Health Care for All Oregon Plan, a universal health care system that is equitable, affordable, comprehensive, provides high quality health care, and is publicly funded and available to every individual residing in Oregon.” Those are the words of the legislative staff summary of the measure.

A different summary adds: “Requires the Commission to produce findings and recommendations for a well-functioning universal health care system that is responsive to the needs and expectations of the residents of the state. …  Requires the Commission to submit its final finding and recommendations to the Legislative Assembly no later than February 1, 2021.”

Whether anything comes of the bill is unknown. As of Wednesday night, the legislative website showed that no action was scheduled. (hh)