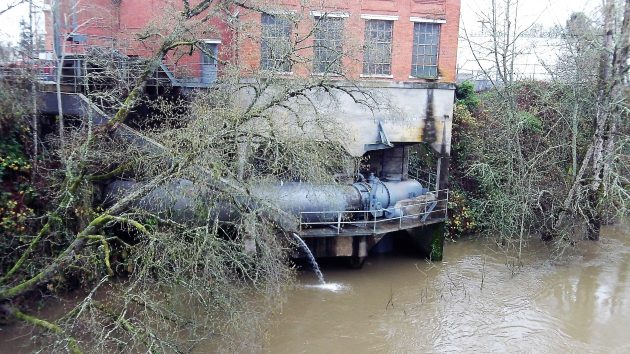 The Albany hydro plant in December 2015, when it was not working due to high water in the Calapooia River below.

Albany’s small hydropower plant, restored in 2009 at a cost of about $2.2 million, was never going to justify the investment in terms of money. Now, rising costs due to more federal regulation are causing the city staff to consider shutting the operation down.

The city council is getting a report on the hydropower program at its work session Monday afternoon (4 p.m. at City Hall). The staff is asking for the authority to study options for reducing or eliminating the regulatory burden connected with the power plant, housed in the Vine Street water treatment plant on the Calapooia River, at the end of the Albany-Santiam Canal. A related question is “whether continued operation of the hydropower project is sustainable,” wrote Mark Yeager, manager of the city’s utility services.

Nearly 10 years ago, the city council commissioned the building of a 500-kilowatt generator. It was built in China, cost the city about $1.6 million, was installed in the historic powerhouse and started operations in 2009. In the years before, Albany had obtained a 50-year federal license to operate the system. Getting the license also entailed constructing about $4.4 million worth of improvements at the Lebanon diversion dam on the Santiam River, including a screen to keep fish out of the canal. (City officials have maintained all along that the dam improvements would have been required anyway — for fish-protection reasons — regardless of the hydro license.)

Power from the generator, enough to supply a few hundred houses, is sold to Pacific Power. But the generator is not allowed to operate when flow in the Santiam falls below a certain level. And it can’t operate when the Calapooia is running high because that reduces the head needed to drive the turbine. As a result, the plant has produced power only 68 percent of the time over the last fine years, according to Yeager’s report.

Direct annual costs of operating the system, including canal maintenance, to meet federal regulatory requirements have averaged $104,000 a year over three years, according to the memo.  Staff time devoted to working with the Federal Energy Regulatory Commission, such as making reports, preparing plans and arranging for safety inspections of the dam, was estimated to cost an additional $135,000.

The memo said complying with the FERC license could be managed in terms of time and effort. “FERC requirements related to dam safety and canal management, however, have become increasingly onerous, and a small facility like Albany’s cannot generate sufficient revenue to offset the ever-increasing costs of regulatory review, required studies, and capital project expenses to meet design standards.”

The standards applied to the Albany system are the same as for huge dams and not affordable for a comparatively small operation. “Albany needs to explore options for reducing or eliminating the hydropower project-related regulatory obligations,” the memo says.

The study of options will probably need legal and engineering help, and that may cost around $90,000. They money would come from the capital budget in the water fund. (hh)