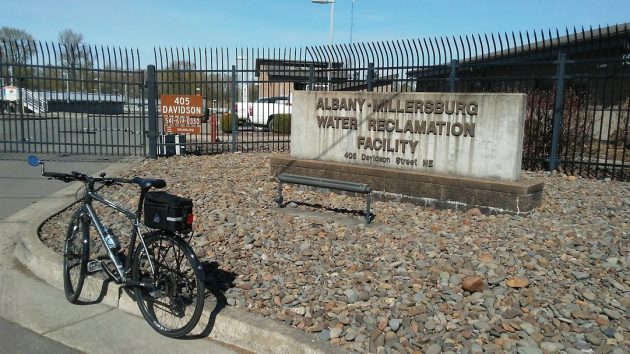 Samples for a COVID-19 study were taken at the sewage treatment plant, seen here on March 22.

Everybody has been saying that people infected by the new coronavirus vastly outnumber the cases actually confirmed and reported. An Albany study appears to confirm that belief.

Biobot Analytics, a company based in Somerville, Mass., analyzed samples of wastewater collected at the Albany-Millersburg treatment plant on April 6, looking for genetic fragments of the virus that are excreted in stool. The testing detected about 30,000 copies of the virus per liter of sewage. And this produced an estimate of 1,500 cases of COVID-19 infection, or 2.8 percent of the population.

At the time of the sampling, 44 cases had been confirmed in Linn County. By this Thursday, more than two weeks later, the Linn County case count had risen to 67.

Albany City Manager Peter Troedsson reported the Biobot results in his Friday summary to the city council. He cautioned that the findings were based on an epidemiological model still being calibrated and refined. The researchers, he said, plan to give future results in ranges rather than specific estimated numbers. The next report will be based on sampling from April 15.

Biobot describes itself online as a worldwide leader in wastewater epidemiology. You can learn more about the company, its work and its staff members here.

How to interpret the Albany findings, if reasonably accurate, may depend on your general outlook about the corona outbreak and our reaction to it.

You can say: Look, in Albany and Millersburg we’ve had roughly 34 times as many COVID-19 cases as we were told we did in the whole county. And the fact that so few people actually became sick shows that the governor was right in ordering many small businesses to shut down and people to stay home. That’s the line of the state epidemiologist, who says the state’s mitigation measures prevented a much worse outbreak.

Or you can conclude: Look, back in early April the Albany area alone had around 1,500 carriers of the virus and almost all of them were not even sick enough to come to the attention of the medical authorities. So the actions to crash the economy, decimate state and local government revenues, and throw tens of thousands of workers statewide on the dole, was overkill to say the least. (hh)