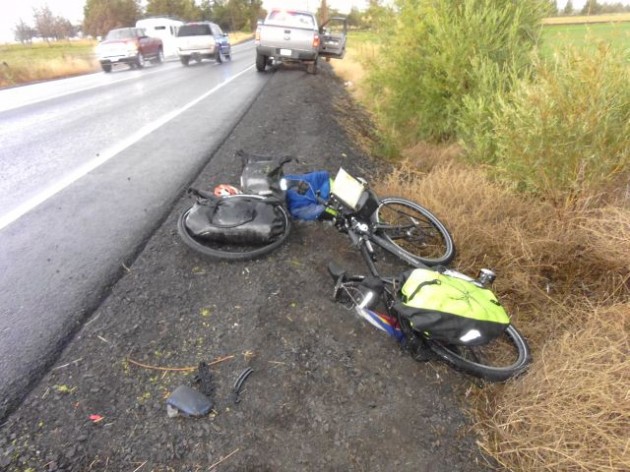 The Oregon State Police provided this photo of the aftermath of a crash in Crook County on Aug. 12. One of the riders was hit from behind.

When it meets in Ontario later this month, the Oregon Transportation Commission is set to allocate $2 million toward the construction of a bike trail between Corvallis and Albany. Two crashes elsewhere in Oregon, one of which killed a cyclist, illustrate why this is a sound idea.

Both crashes happened on Aug. 12 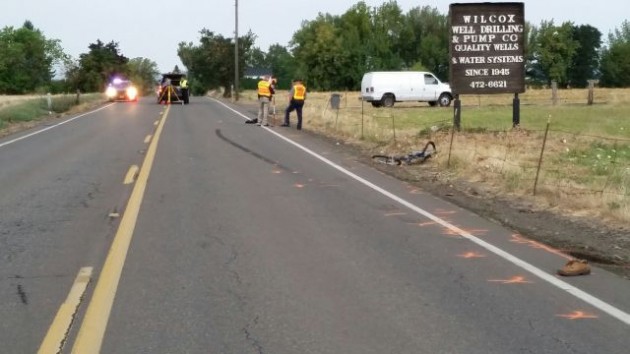 The scene of a fatal bike crash in Yamhill County (OSP photo).

In Yamhill County, 56-year-old Juan Huapeo Garcia, of Carlton, was riding a bicycle on the paved shoulder of Highway 47 north of McMinnville when he was hit from behind by a 1999 Chevy van whose driver, the state police said, evidently had fallen asleep. This was at 5 p.m., in broad daylight. Garcia was dead on the spot. The police said he was not wearing a helmet, (A helmet may not help much if a van mows you down from behind.)

The same day, a little earlier in the afternoon, Frederick Bouwman, 53, from Canada, was riding his touring bike on the paved shoulder of Highway 126 in Crook County when he was struck from behind by the right front quarter panel and side mirror of a 2003 GMC Sierra pickup. He was wearing a helmet, but he was seriously injured anyhow. An air ambulance took him to the hospital in Bend.

Being hit from behind by fowling traffic — that’s the biggest risk bicyclists face on the highway. Or anyway that’s how it feels when you’re riding along, as far to the right of the fog line on the shoulder as you can, and hear a motor vehicle coming up from the back. Does that driver see me? Is is paying attention? Or is he looking for something in his center console? Or admiring the interesting cloud formation on the horizon?

It’s only 10 miles between the city limits of Corvallis and Albany on Highway 20. In reasonable weather, cyclists could easily make the trip on their bikes, saving gas and keeping pollution down. But only a few do. For the others, the risk seems too great. Which of the roughly 20,000 drivers a day will use that day and that moment to become distracted and veer across the white line on the right? At speeds common on that road, the cyclist likely would not survive being hit from behind.

The transportation commission meets on Aug. 21 and 22. The pending allocation to the Albany-Corvallis trail, under the Connect Oregon V program, would go toward extending the planned route from outside of Corvallis to Scenic Drive near Albany. It doesn’t complete the project, but it’s a big step. (hh)