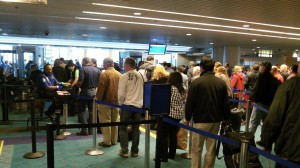 These people at Portland International Monday had better not have any knives.

Two federal organizations have thrown in the towel and given up on making sensible changes in their routines.

Under pressure from Congress, the Postal Service decided it had to keep delivering the mail on Saturdays. And the Transportation Security Administration, under pressure from flight attendants and their union, backed off its decision to allow people to keep their small pocket knives when they board a commercial plane. So much for common sense.

Last Saturday, the mail at our house consisted of a bill and a handful of slick catalogs trying to take business away from local stores. The bill could have waited till Monday, and the catalogs went straight into the recycling bin. This was about normal for the mail on any day, especially Saturday. So why can’t the post office save a little money by cutting back deliveries to five days a week?

As for the TSA, the agency was never known for an abundance of common sense. Instead of zeroing in on likely suspects in their attempt to thwart terrorism in the air, it still makes most people including old ladies take off their shoes. The intention to quit confiscating small pocket knives, announced a couple of months ago, gave rise to the hope that the agency was becoming more realistic. That hope has been dashed, at least for now. (hh)