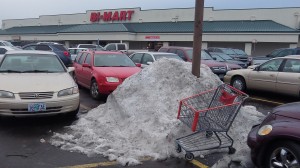 A reminder of the cold snap of December 2013.

In the endless media coverage of climate change, we are bombarded with a lot of pseudofacts, so it’s nice now and then to come across just plain facts — cold facts, so to speak — and some of those became available a few days ago.
A pseudofact is something that sounds like a fact but is actually a mental construct. For example, the other day we heard that this past November the average world temperature had been the highest on record. But the “average temperature” is not real. It’s the result of arithmetic. The average temperature might be a 60 degrees Fahrenheit, which sounds pleasant. But it could be derived from one measurement of 120 and another of zero, neither one conducive to human comfort.

As long as real number show little change, you can relax. And this winter, which starts today, dream of summer, when the sun shines and the thermometer climbs to near 95. (hh)


One response to “Cold facts about warming”