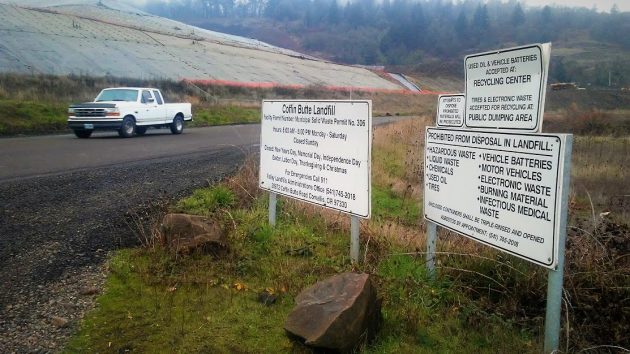 The entrance and exit at the Coffin Butte Landfill last week.

Republic Services has revised downward its intended price increase for dumping small loads at the Coffin Butte Landfill. Instead of $85.75, the minimum fee starting Jan. 1 will be $40.

That’s according to an email from Julie Jackson, the municipal manager for the Corvallis-based operations of Republic Services.

Previously, according to signs at Coffin Butte and a report published in the combined Albany/Corvallis daily on Dec. 8, the company intended to raise the minimum dumping fee from $28.75 for up to 500 pounds to $85.75 for up to 2,000 pounds, an even ton. The company said one reason was to discourage people from going to the dump. It said it was doing so to increase safety and reduce congestion.

Jackson was responding to an email critical of the increase and the reasons for it. “What you do not know is that we have been working all along to change the one-ton minimum requirement,” she wrote. “The signs were put up prematurely at Coffin Butte and I apologize for that. The rate effective January 1, 2019, for a load weighing 500 pounds or less will be $40, not $86.”

She went on: “We do want to encourage people who haul their own trash to check out home-collection options that may work for them for the reasons mentioned before, primarily safety and landfill congestion.”

In her email she said that in Benton County, customers can have Republic come pick up and dispose of a mattress for $35.16. On the phone, she told me that the same service is available in Linn County, but because Republic’s franchises differ from one jurisdiction to another, she wasn’t sure of the price. (hh)