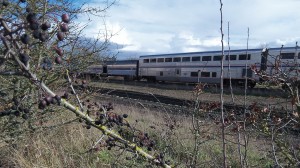 Amtrak’s Coast Starlight heads north out of Albany on the Union Pacific main line. Would coal trains lead to expanding the line’s capacity?

See the reaction at the end.The coal train controversy has come to Albany, unlikely as the prospect of actual coal transport through the mid-valley seems.

A local group led by Peter Goodman of North Albany is worried about the plans by the Port of Coos Bay to become a coal-export terminal. This plan would entail two long trains a day carrying coal on the Union Pacific main line.

Local opponents have organized a public forum from 6 to 8 p.m. on February 17 at the main Albany Public Library. They cite coal dust as their main concern, along with crossing blockages and of course the main reason the environmental movement is opposed: They want to stop the burning of coal in order to slow down global warming.

Coal dust may or may not be a problem. If it is, the railroads carrying coal would have to take measures to prevent it. Meanwhile, though, the Coos Bay plan, if realized at all, would take many years to become reality. If there are problems, there’s plenty of time to work them out.

If in fact the Union Pacific had to move two coal trains a day from the Portland area to Eugene, this might be the impetus for expanding the capacity of the main line, which could have benefits for Albany. For one thing, if the Queen Avenue crossing was shut down for even longer periods to accommodate slow-moving coal trains, this would be an incentive to solve that traffic problem, which is generations old. Since the rail and street grades can’t be separated there, the answer is to close the street and build a grade separation farther south. Likewise, expansion of the line would make more urgent Albany’s proposed construction of the 53rd Avenue overpass, which is necessary anyway if industrial land east of the rail line is ever to be developed.

And finally, expansion of the main line for coal trains would also solve the problem of where to route increased passenger trains. Once the line’s capacity is quadrupled, there would be no sense putting more passenger trains anywhere else. (hh)

From Ted Salmons: Great article.  I grew up in Eastern Kentucky (read coal).  Across the river from West Virginia (read more coal).  Now I’ll admit there are some problems with the mining methods in that part of the country but that’s not the issue with your article.  I’ve seen railroad right of ways that have had uncountable numbers of coal trains passing across them for decades.  And in the spring and summer they are as vibrant, green and blooming as anywhere else in the area.  If the coal industry was “losing” anywhere the amount of product the opponents claim, they would have covered the cars years ago and the railroad right of ways would have burst into flames long before now.
In WV they usually spray slight amounts of dihydrogen monoxide (read cheap and available) on the loads of coal to keep the dust to a minimum during transport.  Hopefully the opponents won’t go high and to the right when they find that out.

From Jody: After reading the comment from your other reader, about spraying DHMO, I googled that and found this on widipedia, if that is to be a trusted source:
Dihydrogen monoxide:
is called “hydroxyl acid”, the substance is the major component of acid rain.
contributes to the “greenhouse effect”.
may cause severe burns.
is fatal if inhaled.
contributes to the erosion of our natural landscape.
accelerates corrosion and rusting of many metals.
may cause electrical failures and decreased effectiveness of automobile brakes.
has been found in excised tumors of terminal cancer patients.
Despite the danger, dihydrogen monoxide is often used:
as an industrial solvent and coolant.
in nuclear power plants.
in the production of Styrofoam.
as a fire retardant.
in many forms of cruel animal research.
in the distribution of pesticides. Even after washing, produce remains contaminated by this chemical.
as an additive in certain “junk-foods” and other food products.

Editor’s note: Dihydrogen monoxide is another was of saying H2O, and Wikipedia is not above carrying a satirical entry.