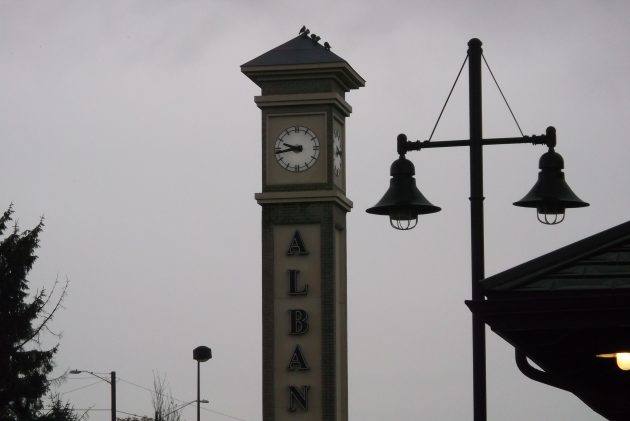 At a quarter to 10 this morning, pigeons have gathered on the clock tower at Albany Station.

You already know not to expect monumental news on this site. So instead, here’s a bit of small good news: Repairing the clocks in the tower at Albany Station cost far less than they thought.

All four clocks on the 60-foot tower had been out of whack for a while, all showing different times of day and all being way off the actual time. Three of the clock motors had seized up, and one was slipping. So, the city engaged Foress Sign Co. to make repairs.

Tom Valentino, the city’s facilities maintenance superintendent, expected the replacement motors to be about $250 each.

The sign company did the repairs on Oct. 28, but it took a few days to submit the bill.

On Wednesday I heard from Holly Roten, the city’s public information officer. “I found out today that the cost to repair the clock tower was $619.38.”

Wait, I wondered, was that the total?

“That’s correct,” she replied. “The motors ended up being a lot cheaper than what we’ve paid in the past.”

That surely was a nice surprise. (hh)

The story has been edited to fix the typo in the spelling of the sign company name.