Climate change or something else? – Hasso Hering

Climate change or something else? 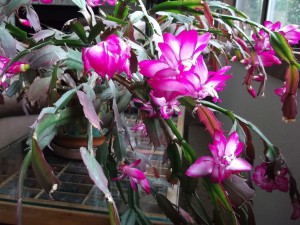 Our cactus is blooming early. Climate change at work? Nah, probably not.

A study publicized by Oregon State speculates that climate change is causing additional stress to western rangelands where cattle and wild animals graze. In the Los Angeles Times, an art critic reports on the flooding in Venice. He suggests that the annual winter flooding there is much worse this time because of global warming. We know about Hurricane Sandy on the East Coast, also said to be some sign of climate change. And now the aging cactus in our living room has bloomed, which usually doesn’t happen till around Christmas. Must be another sign of global warming.

Really? No, not really. I just thought I’d mention the cactus because now anything unusual seems to have the same cause: climate change, at least in the eyes of the popular press.

Here’s what I’m thinking. Of course the condition of western rangelands is affected by the weather, as it is by whatever else happens there, including grazing and the proliferation of wildlife such as feral horses. That doesn’t mean we should decimate the animals or ban cattle grazing, which the study admits would cause all manner of economic hardship.

Another recent study worried about the effect of climate change on mountain meadows in our region. Only problem is that generally our region’s temperatures have been trending down in the last 20 years, not up. What does THAT do to alpine meadows? As for Sandy, it was an unusual combination of storm patterns combined with high tides that caused the damage. The tides are caused by the moon.

And what about Venice? How could global warming raise the tides at the top end of the Adriatic Sea? Storm surges are a more likely cause, or perhaps the land in that part of the world is slowly sinking.

Our cactus in the living room? I have no explanation for that, but I seriously doubt that our houseplants are affected by anything other than how often they are watered and how high we set the heat. (hh)

Jennifer Anne Taylor: It’s not just you.  Mine’s blooming early too.  Must be a conspiracy.

Hazel Siebrecht: Mine is blooming, too. It sometimes blooms in April; then it is my Easter cactus, in November it becomes my Thanksgiving cactus and, while it probably won’t bloom again by Christmas, if it does, I have a name chosen for it!  God is in charge of all creation, mere man can ony hope to improve on Him.