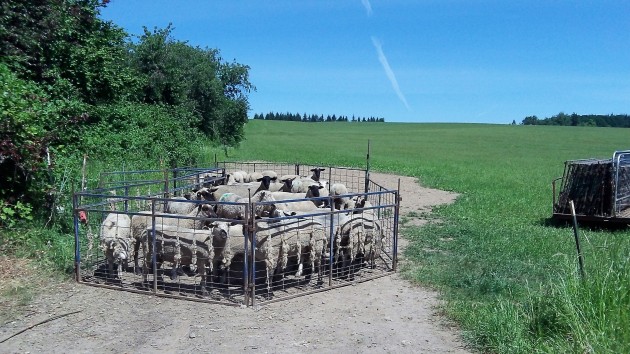 If some fanatics had their way, climate skeptics might end up being rounded up like these hapless sheep.

Although no one mentioned this, it seems to me that the Portland schools now face a problem: What to do with books and other material doubting that mankind’s use of fossil fuels is mainly responsible for climate change. I suggest a solution in the spirit of the Portland School Board’s decision last week to ban such material from the schools: Have students pile up the offending books in a great big heap and set them on fire.

Actually, it’s kind of surprising that school books still have not fallen completely into line. Yet, as one person complained to the Portland board, there are still too many books that use words like “may” and “might” to describe what fossil fuels are doing to the climate. And that allows for too much freedom of thought.

Burning books used to be the approved method in totalitarian systems of getting rid of ideas running counter to the prevailing ideology. And presumably Portland school children, brought up in a system that would yield such a decision by a unanimous board, would be enthusiastic about putting to the torch the output of enemies of the state.

Enemies of the state? Sure, that’s how some people in government and academia now regard anyone who questions the tenets of the global warming religion. There have been calls, isolated so far, to put climate change skeptics in jail. The attorney general of the United States has asked the FBI to investigate whether Exxon could be prosecuted for misleading the public about climate change. The attorney generals of New York, California and other states are suing the energy company. The attorney general of the U.S. Virgin Islands has served a subpoena on a non-profit organization keeping the climate debate alive.

We are told that 97 percent of scientists think we’re to blame for global warming and we must do something to prevent a catastrophe. The 97 percent assertion has been debunked. But even if it were true, even if 100 percent of all scientists were on board with the theory as proven beyond any doubt, would that be a reason to shut up, shout down and even prosecute and possibly jail anyone who raised questions?

You’d think that if the science were so convincing, it could stand on its own. Its supporters would not have to resort to prosecuting those who dare to have other ideas.

Totalitarian societies typically do their best to suppress free speech and free inquiry in science. That seems to be where we are heading now. It’s sad that the school board in Oregon’s biggest city is making the place sound like the People’s Republic of Portland. (hh)