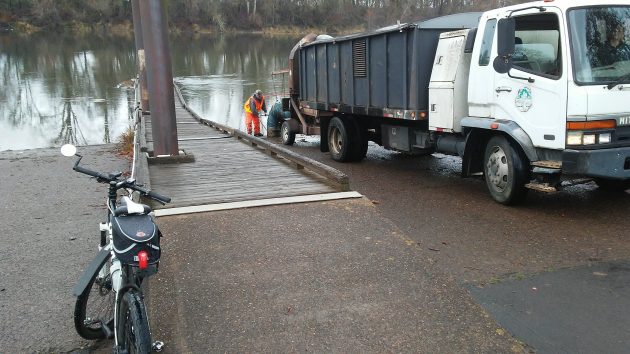 When you think of all the things the Albany Parks Department has to do, vacuuming the boat ramps on the Willamette River probably doesn’t immediatetely spring to mind. And yet, it appears to be one of the items on the lost of autumn chores.

I was at Bowman Park again Friday just as the scene above unfolded. Evidently dead leaves and other muck had bunched at the a bottom of the ramp, and the crew took care of it.

A few days ago the Weather Service was forecasting a big rise in the river level, from about 2.5 feet at the time to more than 11 feet by Saturday night. But that forecast has fizzled.

As of Friday afternoon, the new forecast was for only a modest rise to about 4.5 feet on the Albany gauge by Saturday afternoon, to be followed by a gradual drop during the following days.

Evidently it didn’t rain nearly as much on Thursday and Friday morning as the forecasters had expected earlier in the week. That’s just as well in one way: Riding the bike through Albany neighborhoods is kind of fun, and it is even more enjoyable when it’s not pouring at the time. (hh)

One response to “Clearing the Bowman Park ramp of debris”