City will ask for proposals — again 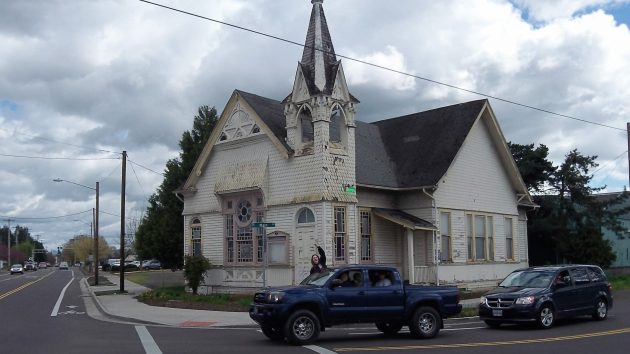 At Main Street and Santiam Road: The former church in a shot taken in March 2016.

If anybody is willing to take on the former Cumberland Presbyterian Church in Albany, the city council wants to find out. So council members agreed on Monday to have the staff whip up a request for proposals from anyone who has ideas about the 124-year-old building, which is badly in need of serious and expensive repairs.

The council didn’t set a deadline but indicated it wanted things to move quickly, unlike the last time. The city had asked for proposals in February 2014, then agreed to give the building to a charity that wanted to seek grants to fix it up as a counseling center if it could get land-use approval. But the idea went nowhere, and nothing else concrete happened until now. In 2014, estimates to restore or save the building ranged from about $150,000 to more than $240,000. Now a nearby coffee shop is renting the place for storage.

How about the city moving the building to nearby lot and then trying to sell it, Mayor Sharon Konopa wondered. She’s afraid the structure might not survive the move, though. And Councilor Bill Coburn said the city should not take the risk involved in moving it.

Councilor Rich Kellum asked that the request for proposals include the fewest possible restrictions so that people have the greatest possible range of options as to what to do with the property. Councilor Ray Kopczynski noted that the city spent $150,000 to acquire the property in 2000 for a street project that then didn’t need it, and he worried about spending even more money in getting rid of it. And Councilor Dick Olsen alluded to the landmark status of the building, suggesting that city help in fixing it would be in line with the blight-fighting mission of the central Albany urban renewal district.

Staff members told the council they had heard from several people interested in the property, including one with experience and the means of restoring relics like this, but they didn’t give details.

Nobody on the council Monday said anything like: “Let’s tear the thing down and sell the site.” But I wondered if any of them thought it, considering how long the city has dealt with this already, without a buyer in sight or a viable use that didn’t first cost a couple hundred thousand bucks. (hh)


5 responses to “City will ask for proposals — again”