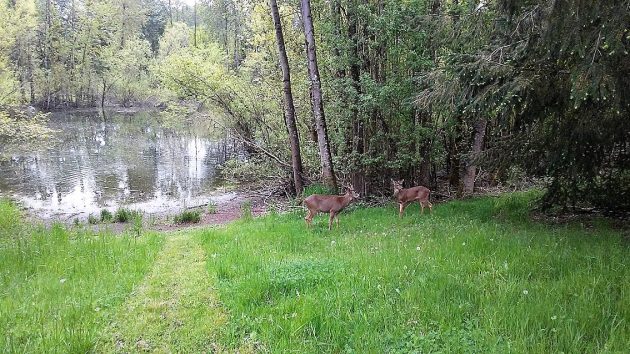 In a photo taken in May, deer graze near the city-owned pond north of Hickory Street N.W.

The Albany Parks Department has no use for a little pond the city owns next door to a planned North Albany apartment project and would like to dispose of it. Go ahead and get that process started, the city council said this week.

Ed Hodney, director of parks and recreation, brought it up at the council’s work session Monday. The site apparently was excavated as part of the nearby North Pointe development about 20 or so years ago, and the property then was donated to the city as open space.

The city’s parcel is surrounded by private property, and there’s no public access to it. Hodney said it’s of no recreational value to his department, and he recommended selling it. The surrounding banks are steep and the pond is a true “wetland,” so it can’t be developed. Benton County says its assessed value is just under $30,000.

The neighbors who have been taking care of the meadow down to the pond, Lee and Sue Cutsforth, showed me the place last spring when I was asking about a proposed development in the vicinity.

The development, at 321 and 333 Hickory Street, is a 40-unit apartment complex called Sunset Village. The developer is based in Fond du Lac, Wisc. The city planning division approved the site plan on Sept. 6. And on Nov. 6 and 7, the building division approved construction permits for two buildings, one with 22 units and the other with 18.

It will be the second apartment complex to go up on Hickory. The other, Hickory Hollow with 48 units, opened this summer west of North Albany Road.

The new apartments’ parking lot would be just south of the parcel with the pond. How the deer and other wildlife on this property will react, well, they’ll either get used to it or leave. (hh)


13 responses to “City to dispose of N. Albany pond”