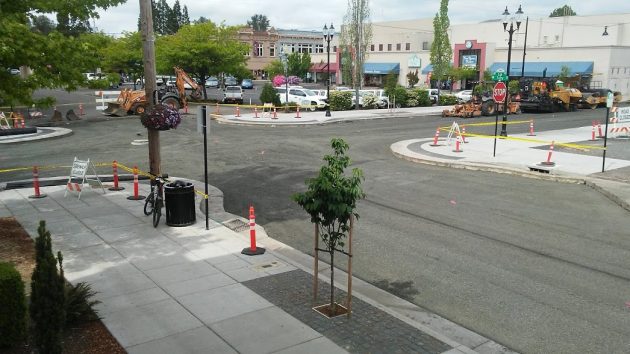 The intersection of Third and Ferry awaits new pavement in this view Saturday from the public library’s steps.

In case you want to keep track, the anticipated cost of Albany’s downtown streetscape project has topped $10 million. But it’s still under budget, according to the latest update.

City Manager Peter Troedsson sent the city council a breakdown last week, and he emailed me a copy.

The actual costs won’t be known until some time after the project is completely finished and all the bills have been paid. But so far, the anticipated total cost of Phases 1 and 2 of the downtown street work — new sidewalks, paving, lights, trees and furniture — is $10,612,200.

That’s up from about $9.7 million in January. One factor in the increase was that the council, as the Albany Revitalization Agency or ARA, decided to increase the extent of the repaving of seven blocks of Second and Third avenues, turning the work into a full reconstruction so that the result would last much longer.

ARA is the city’s renewal agency, run by the city council. It’s a little complicated, but ARA is the governing agency of CARA, the Central Albany Revitalization Area.

Anyway, CARA or ARA — being the same outfit, essentially — is funding about $8.4 million of the streetscape job with money it already had or borrowed. It gets its revenue from property taxes collected on the increase in taxable value of the 900-acre central Albany urban renewal district since it was formed in 2001.

Another $1.4 million for the street work is related to underground utilities and comes from the water system’s capital fund. To cover overages, the water fund also contributed $555,000 from reserves.

Troedsson says the the total streetscape budget was about $11 million. So far, the sum of anticipated expenses is about $400,000 less than that. (hh) 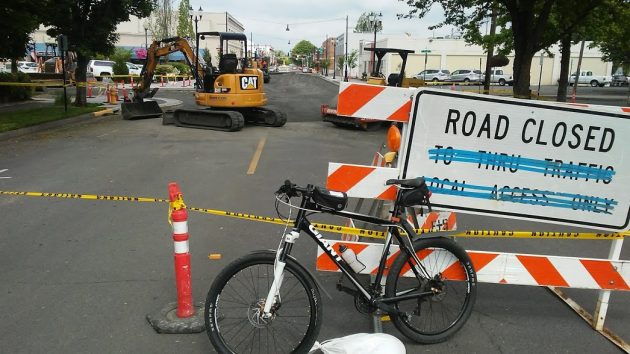 The barriers should come down as each block of the street reconstruction is finished. All seven blocks should be complete in July.

11 responses to “City streetscape job: The latest on cost”