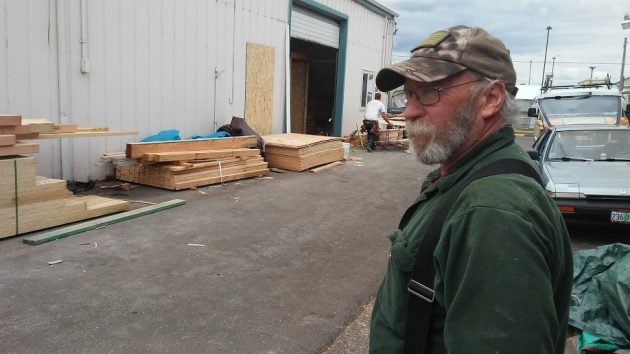 In May 2017, George Matland was overseeing construction of the Signs of Victory homeless shelter at 11th Avenue and Jackson Street.

Concerned about conditions at the Signs of Victory homeless shelter, Albany officials are working on a plan to deal with the situation, the city council learned Wednesday.

City Manager Peter Troedsson gave no details, saying that the proposal was not yet “ready for prime time.” He said he would bring it to a council meeting soon.

In 2017 the ARA loaned Signs of Victory $100,000 at 2.9 percent annual interest over five years to enable the mission to complete a new homeless shelter with 114 beds at its leased property at the corner of Jackson Street and 11th Avenue.

George Matland and his sister Gale Meehan run the mission, started by their mother, the late Maxine Matland. On Wednesday, the council/ARA voted 5-2 to approve a request by Matland to postpone a $27,175 loan payment due last December and instead pay only interest of $2,175. Councilors Rich Kellum and Mike Sykes voted no.

The mission has been counting on Christmas tree sales to make the annual loan payments. But tree sales this past holiday season were poor.

During the discussion on the loan issue and later, Kellum, Sykes and Councilor Bessie Johnson voiced concerns over the mission’s operation.

The council heard briefly from Troedsson and Kris Schendel, the city’s code enforcement officer whose program is funded 50 percent by CARA.

Troedsson acknowledged Signs of Victory as an important component of the community’s efforts to deal with homelessness. But according to Schendel, the mission’s shelter has a number of problems with alleged code violations on things like sleeping spaces, food storage, trash disposal, and others.

When Mayor Sharon Konopa said something about working with the mission leaders to to solve those issues, Kellum said, “Work with them or find somebody else.”

As for the substance of whatever the city administration has in mind, we’ll have to wait until it is revealed. (hh)

The story has been edited to correct who was talking about working with the mission.


11 responses to “City officials concerned about Signs of Victory”