City agrees to try to save this tree 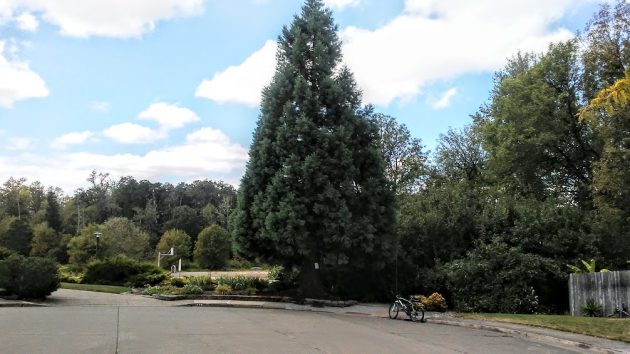 The sequoia at Teloh Calapooia Park, seen on Aug. 8, will be allowed to stay, at least for a while.

There’s a tree at the back entrance to Teloh Calapooia Park in South Albany, and its roots are causing trouble. But a plan to take it out has been set aside for now after people in the neighborhood asked the parks department to take another look.

The tree, a sequoia, stands next to a concrete path into the park from Tamarack Court, close to the sidewalk and a ramp for wheelchair access. The roots have caused damage, repaired with asphalt patches in the walk.

Signs on the trunk and elsewhere alerted passers-by that the tree would be taken down this month. That prompted a number of emails to the city parks department — and a couple to me. I went to take a look on Saturday.

On Monday, Rick Barnett, the park and facilities maintenance manager, told me that Ray Kopczynski, the former council member who lives in the neighborhood, had been working with the parks crew on possible solutions.

So, the parks department will try to save the tree. It is considering pulling the concrete panels near it and checking the roots, and then replacing the panels or, if they’re broken, using asphalt instead.

“It’s a nice sequoia but it isn’t historic or even particularly old,” Barnett said. “It is certainly worth saving if we can.”

So how old is that tree? You can’t tell exactly unless you cut it and count the rings. By my estimate  — based on the similar size of a sequoia we planted in front of our house — it’s about 20 to 30 years old.

For now, anyway, it may get the chance to keep growing there for a few more years. But, as Barnett put it, “there are no guarantees. It all depends on what we find.” (hh) 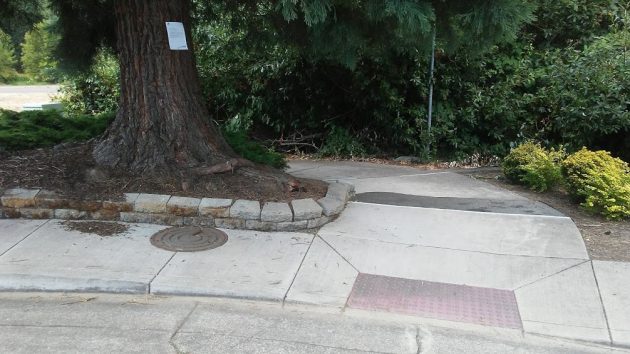 The sidewalk, manhole cover and wheelchair ramp near the path into Teloh Calapooia Park.


6 responses to “City agrees to try to save this tree”