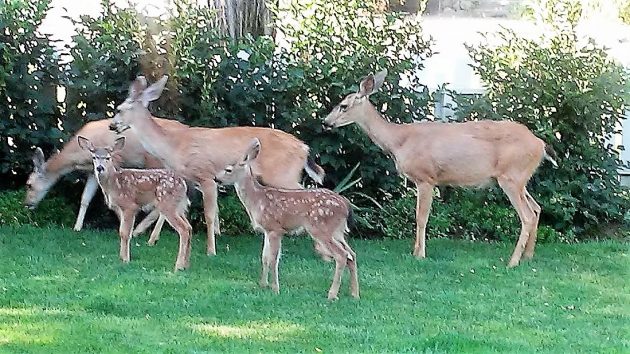 They were just browsing and passing through a front yard in Jacksonville, OR, this morning.

Albany may not have a problem with too many deer, but some Oregon cities apparently do. To help them, the legislature passed Senate Bill 373, which calls for a way to get rid of some of those urban deer.

The governor has signed the bill, and it becomes law on Jan. 1, 2018. It calls on the Oregon Department of Fish and Wildlife to set up a program that could, theoretically, result in authorized hunters shooting deer in cities that want this done.

But there are steps that would have to be taken first. To begin with, a city with a deer problem must pass a local law forbidding the spreading of food that attracts the animals. Right away, you can see the snag. Lots of people have bird feeders in their yards because they enjoy watching the finches and towhees and so forth. Those people are going to fight any ordinance that keeps them from filling their feeders with sunflower seeds, and if that fails they’re going to ignore the law.

Once ODFW has adopted the obligatory regulations and the program is set up, a city could declare deer to be nuisance and petition the department to authorize the “taking” of deer by agents of the department or the city. Imagine the public hearings where “killing Bambi” was the idea.

And when the hunt is on, hitting the animals with tranquilizer darts and then hauling them off to be killed would not be allowed. Under the bill, salvageable parts of the carcasses are to be made available to food banks, and who wants a little tranquilizer in his meat?

The law says the urban hunters could take only as many deer as necessary to reduce the nuisance. Presumably it would be up to the local council to define exactly how many that is.

Just now a fawn was outside my window, looking in. “Where’s your mother?” I asked, and it scampered away, blissfully unaware that I was typing up a story about Senate Bill 373. (hh)