Checking in on ‘passenger rail’ 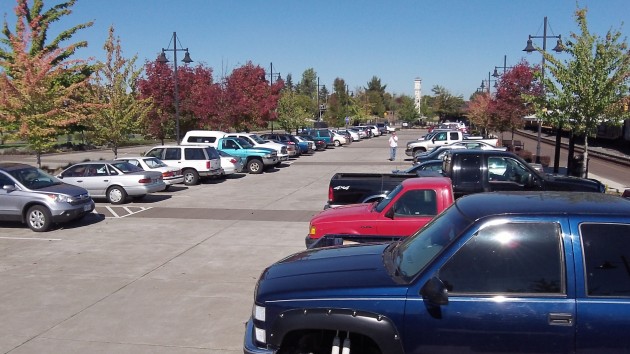 The parking lot at Albany Station was nearly full on Friday afternoon.

A nearly full parking lot at Albany Station on a weekday afternoon reflects the interest in train and bus travel up and down the Willamette Valley and beyond.  It also suggests that it might not be too soon to look for expanded parking, which will be needed if plans to increase train service ever yield results.

On Friday afternoon, I climbed on the back of my truck and shot this image. Then I walked up and down the rows and counted 63 vehicles, not including mine. Only about a dozen parking spaces were open, and some of those are restricted to only one hour. As it happens, a former car lot on the southwest side of the station’s parking lot is for sale — or was the last time I looked.

Whether more parking will be needed may depend in part on the drawn-out process of trying to upgrade passenger rail between Eugene and Vancouver, B.C. Since 2012, the Oregon Passenger Rail team and a leadership council of elected officials have been studying potential new track alignments in order to shorten the trip between Portland and Eugene to less than two hours.

They picked two routes for further study. In the segment between Eugene and north of Albany, one follows the Union Pacific Main line that passenger trains now use. The other runs along Interstate 5, which would require a new Albany station, but one option for that alternative would be a detour off the freeway to make use of the existing station.

The Federal Railroad Administration has approved the two alternative routes for continued study under the “Tier 1” environmental evaluation, which is what’s been going on all this time. So are we getting close to some real results? Nope. All this planning until now was merely preliminary.

This month the rail project outlined the “next steps.” Take a deep breath: “The next steps are: 1. The project team will begin more detailed study of a No-Action alternative and the build alternatives approved by FRA. When completed, the Tier 1 Draft EIS will be published for agency and public review and comment.

Which is why, unless you are in your teenage years, you have no hope of riding a train to Portland in the faster and more frequent service that all this planning is meant to bring about. (hh)


7 responses to “Checking in on ‘passenger rail’”