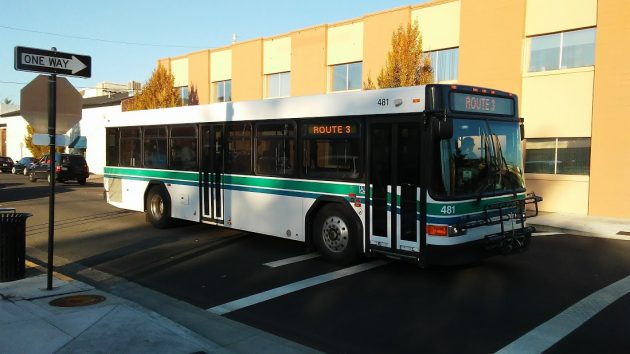 An Albany Transit System bus heads south on Washington Street on the afternoon of Oct. 27.

A plan worked out by consultants calls for changes in the Albany bus system to make the service more reliably punctual. It also proposes an expansion of the system years from now.

The system carries about 80,000 passengers a year, according to the transit development plan put together by Nelson-Nygaard, a consulting firm with offices across the country including Portland. Albany’s fixed-route bus system, the study says, is minimal. “For a community of its size, fixed route service is small, with just two buses running during the weekday and no service on weekends.”

Later on in the 20-year planning period, the plan suggests going back to hourly service and adding a third bus, bringing costs to about $1.1 million a year.

Still later, in what the plan calls the “long term,” it calls for eight buses to run every 30 to 60 minutes between 6 in the morning and 8 at night. This would cost about $3.2 million a year.

It now costs a dollar to ride an Albany Transit System bus. The consultants recommend against raising the fare because most riders can’t afford it.

The transit development plan was being reviewed by the Albany City Council at a work session this afternoon. Whether anything comes of it depends on future council actions, such as deciding whether to budget the money needed to expand the system, and where to get the cash. (hh)