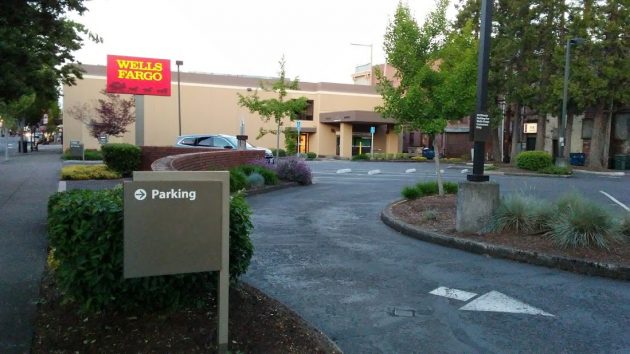 The Wells Fargo property (as it looked in May) is for sale, and CARA has been urged to  buy it.

Albany’s urban renewal agency will try to buy a downtown property. They don’t want the public to know which one, but it sounds like the building and parking lot of the former Wells Fargo branch on First Avenue.

On First between Broadalbin and Ferry, the property was identified in a 2011 CARA plan as a key element for redeveloping downtown. Now that the branch is closed and the real estate is for sale, the speakers said, CARA should seize the opportunity so it can control what happens there.

They also said the parking lot is important if the former St. Francis hotel building across Ferry Street is ever going to be renovated.

Later in its Wednesday meeting, the CARA advisory board went into an executive session closed to the public, as allowed by law, to talk about real estate transactions. The audio recording of the meeting was shut down. When it resumed, the board voted to recommend that the Albany Revitalization Agency “make an offer on the property.” Immediately following that, the city council in its capacity as the ARA voted unanimously to authorize economic development director Seth Sherry to do so.

If the CARA board talked about money, it was during the part of the meeting from which the public was barred. In its tax records, Linn County says the bank property has a market value of about $1.1 million.

The Wells Fargo site is not the only downtown property CARA, or ARA, or the city government,  basically all the same, has had it eyes on. There’s also the Eagles clubhouse at the foot of Broadalbin, identified in a CARA plan as future parking space.

The Eagles have listed their building for sale at $950,000. But the context of the public part of the discussion suggests it’s the bank property that was the object of the CARA action last week. (hh)


17 responses to “CARA wants to buy a downtown property”