CARA: Progress, and a tough call 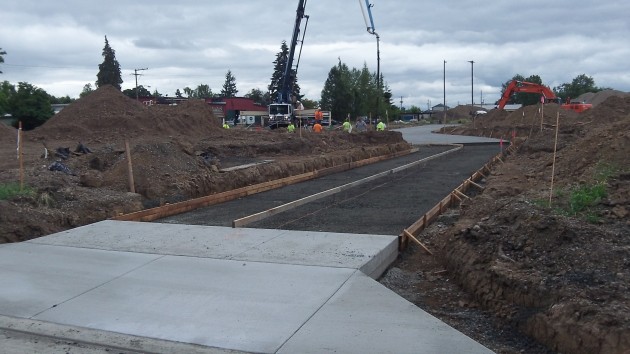 Streets are being built at Edgewater Village on Tuesday.

CARA, Albany’s downtown urban renewal program, this week is beginning to see tangible results from two of the biggest projects it has supported with financial aid. It also faces the tough call of whether to extend and perhaps even forgive a $200,000 loan whose terms call for it to be repaid now.

First, the tangible results: Contractors are making swift progress on putting in streets and what appear to be concrete alleys or paths in the first phase of Edgewater Village, the riverside development that plans to build the first five of 60 houses on the Willamette River this fall. CARA has spent $2.4 million on the project. Full development will take several years — the CARA board recently extended all the deadlines by a few months — and once the 60 houses are built and sold for an average $225,000 each, arithmetic says the project will add $13.5 million to the taxable value of downtown. 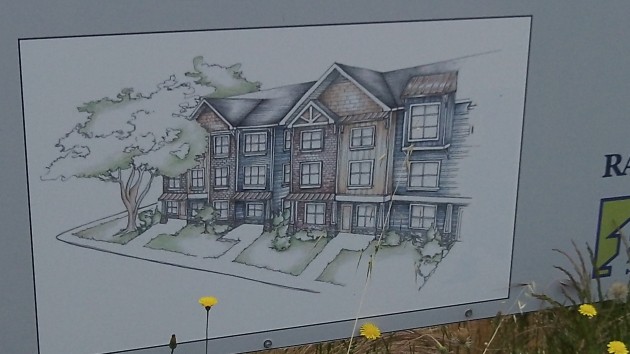 Sign shows off the concept of the new Woodland Square.

Also this week, on Monday, Innovative Housing Inc. of Portland and city officials had a little ceremony to start construction of Woodland Square, the 54-unit apartment complex taking the place of the dilapidated trailer park of the same name at Pine Street and Second Avenue. The next day, the sign of progress was that Greenberry Construction’s trailer was parked on Pine. CARA contributed about $850,000 toward what is expected to be a $10 million project. Other financing comes from state tax credits and private sources.

One of the side benefits of Woodland Square is that the project will also clean up the jungle-like banks of Periwinkle Creek on the parcel’s eastern edge and build a public path there. 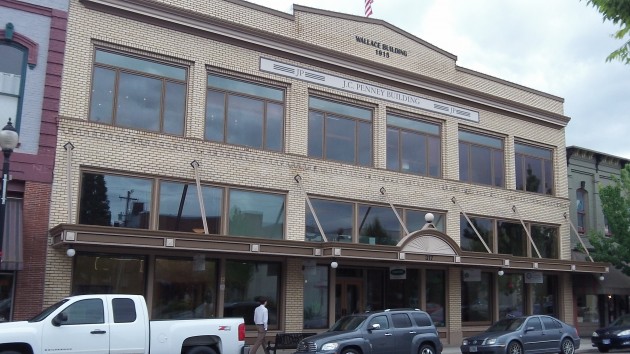 The J.C. Penney Building has not found someone to open a restaurant.

As for the tough call, the CARA board has been asked to modify a $200,000 forgivable loan it agreed in 2009 to provide in order to make sure a restaurant opens on the ground floor or the renovated J.C. Penney Building. (CARA also gave the $5.4 million renovation project $542,500.) Owner Rick Mikesell says he spent more than the loan amount to outfit the space for a restaurant but has been unable to find someone who wants to open one there. He’s asking for another two years to land a restaurant. If he can’t find one, he’d like the loan to be forgiven anyway and he’ll find someone to lease the space for some other purpose.

On the one hand, there’s  the contract and the $200,000 that CARA would like back. On the other, the money has been spent the way CARA wanted, except that the demand for a restaurant (with at least 200 seats and open for lunch and dinner at least five days a week) proved unrealistic. There’s already a surplus of restaurants downtown. The space that used to be Wyatt’s is empty and for lease. A few blocks away, the Wheelhouse too has been unable to fill its ground floor with a restaurant as CARA had hoped.

The CARA board meets this afternoon (June 18, 5:15 at City Hall). Under the circumstances, it would not be unreasonable — at least to me — for the board to admit that its desire for a restaurant was not realistic and to let the Penney Building rent the space for other uses. As for the money, that’s been spent to try to fulfill CARA’s wish, and it seems unreasonable to insist that the owner give it back. (hh)


11 responses to “CARA: Progress, and a tough call”