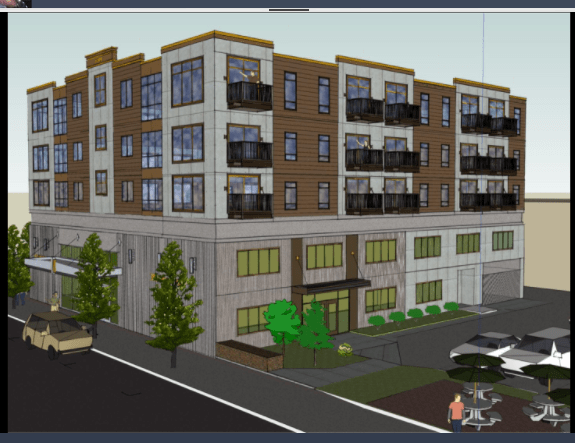 The CARA board saw this rendering of how the former Wells Fargo branch might be redeveloped by adding three floors of apartments.

No surprise here: A proposal to redevelop the former Wells Fargo branch downtown will need financial help from CARA, the Albany urban renewal program. And the CARA board appears ready to give it, though no specific dollar amount has yet been asked.

On Wednesday, builder Tom Gerding showed the CARA advisory board some preliminary numbers. He also presented renderings of what the now-vacant building at 300 West First Avenue might look like with three floors of apartments added to the existing ground floor and mezzanine.

The three new floors would total 30 apartments renting for an average of $1,350 a month.

Gerding estimated the development would cost just under $10.7 million. The completed building’s value would be around $7.5 million, for a “variance” of about $3.2 million.

The builder, whose firm constructed, among others, Albany’s new police and main fire stations and the West Albany High School expansion, told the CARA board that for the Wells Fargo project to move forward, he would need assistance from CARA.

There was no vote, but all the CARA board members present (or the ones I could see on the screen showing the virtual meeting online) nodded their heads or otherwise signaled Gerding to keep going on the project and come back with a request for money when he was ready.

It will be several months before that happens because more design work has to be done. In the meantime, CARA is likely to get a request for financial aid for the redevelopment of the former St. Francis Hotel one block to the west.

Development Manager Seth Sherry reminded the board that the urban renewal program has enough spending authority left to enter into partnerships for two major projects and also pay for upgrades along the Willamette Riverfront.

All these moves are taking forever, it seems.

It was two years ago, in February 2019, that the city bought the building Wells Fargo had closed the year before. Then, in June 2019, the CARA board picked a partnership including Gerding as the prospective developer to whom to sell the property if a development agreement can be worked  out. Two of the partners, Sybaris restaurant owner Matt Bennett and Buzz Wheeler of Coastal Farm, have dropped out, and Gerding remains.

Gerding told the board the margin to make this project go was “razor-thin” and he had been ready to walk away. He stayed with it because of its eventual chance of success in concert with other downtown and riverfront improvements.

“I encourage you to keep going,” Councilman Dick Olsen told him. That was the sense of the rest of the CARA board as well. (hh) 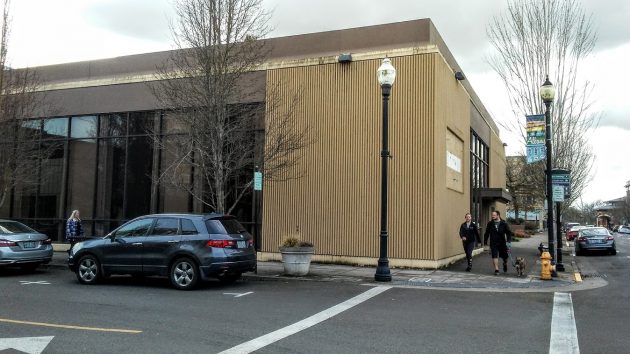 Outside the former Wells Fargo bank at First and Broadalbin on Wednesday afternoon.