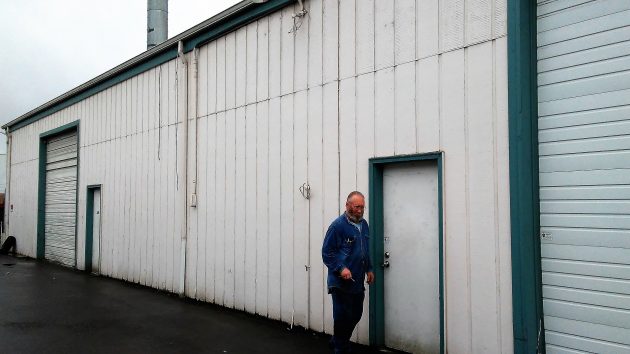 George Matland outside the warehouse Signs of Victory is turning into a shelter for people in need.

The Signs of Victory mission has received final approval of a five-year, $100,000 loan at 2.9 annual percent interest to help build a new Albany homeless shelter, but because of a state rule on wages the city contract is also driving up the project’s cost.

The city council, acting as the governing agency of the Central Albany Revitalization Area, unanimously approved the loan agreement on Wednesday. Signs of Victory intends to use the money to help pay for converting the two halves of a former warehouse at 405 11th Ave. S.E. into two dormitories for 114 people. One side will house men, the other women and children. The property is part of a complex at the corner of 11th and Jackson Street that also holds the Signs of Victory offices, food distribution, warming shelter and church.

As part of the agreement, Signs of Victory agrees to close the “Freedom Roadhouse” shelter it has operated for years at 120 Seventh Ave. S.E. The CARA advisory board had endorsed the loan application as part of its mission to deal with blighted conditions downtown. Originally, last year, CARA had intended to buy the Seventh Avenue Roadhouse so that George Matland, the director of Signs of Victory, and his sister could use the proceeds for the new shelter. But the city backed off buying the house. And the loan deal was made instead.

To get the first $50,000, the mission has to give the city a deed to the Seventh Avenue house, close the house and secure it. The city will return the deed without recording it once the new shelter is complete. No one explained, and the council didn’t ask, how a boarded-up old house advances the CARA mission of urban renewal. 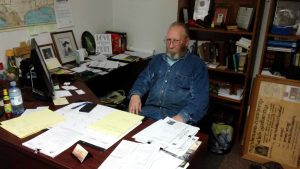 George Matland in his office Thursday.

The mission won’t get the second half of the loan until the new shelter is completed and approved for occupancy.

The city loan also apparently makes the shelter a public project. So the contract requires the mission to pay so-called “prevailing wages” on any of the warehouse remodeling done by contactors. State law requires building trade workers on public projects to be paid the wages that are usual in their areas. Regulations by the state Bureau of Labor translate the term “prevailing” to mean union wages. (For a “sprinkler fitter,” the required wage in Linn County is $43.24 an hour. For a plumber, it’s $59.38.)

In his office on Thursday, Matland told me that he had received a bid for sprinklers at more than $57,000. But with the wage requirement, the sprinkler bid went up 11 percent to about $64,250. If his revised bid for plumbing rises by about the same rate, he expects it to jump from $27,500 to $30,525. He still seems confident he can complete the project this summer.

Signs of Victory expects to repay the loan from proceeds of Christmas tree sales and other ventures, including sales of used pallets. That’s something for the public to remember next December when it comes time to get a tree. (hh)