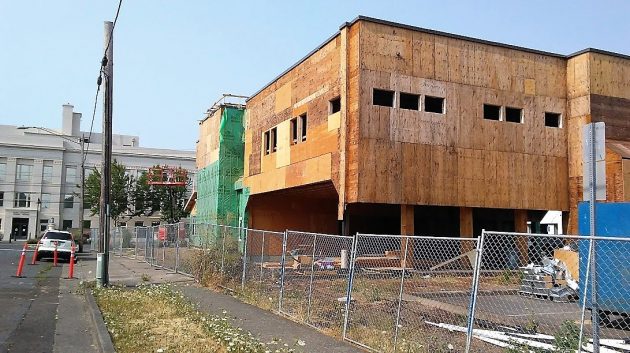 The future ABC House under construction on Aug. 9, with the Linn County Courthouse across Fifth Avenue.

CARA is being asked to give $10,000 to another downtown Albany building venture, but the push for major projects to complete and then wind up the 17-year-old urban renewal program seems to remain stalled.

The agenda for the Aug. 15 meeting of the advisory committee of the Central Albany Revitalization Area lists only one specific item. It’s a request by ABC House for a $10,000 grant to help pay for what it says is the roughly $100,000 expense of putting siding of the long-vacant former insurance building at 228 Fifth Ave. S.W.

The CARA agenda material says the remodel is estimated to cost more than $3 million, and ABC House has been conducting a fundraising campaign to pay for it.

In a memo to the CARA board, Economic Development Manager Seth Sherry recommends approval of the grant in the interest of eliminating blight. The organization says in its application that if if doesn’t get the grant, it will have to raise the amount elsewhere.

It was a year ago, with the $8 million downtown streetscape project set to wind up in 2018, that the CARA board was urged, by the mayor among others, to start thinking of its next major effort. So far, though, it has not publicly discussed, let alone pursued, anything big.

The CARA district, started in 2001, had a list of about 50 projects estimated to cost $56 million by the time they were done. The district was to borrow money to accomplish them, repay the borrowed money with taxes siphoned from other taxing districts including the city, schools and county, then go out of business by about 2026, allowing the other taxing district to recoup their losses with the tax revenue from the then-higher value of the urban renewal district.

A couple of months ago, a consultant advised the CARA board it should launch projects and complete its mission as quickly as it can. But there was no urgency before then, and there hasn’t been any since. (hh) 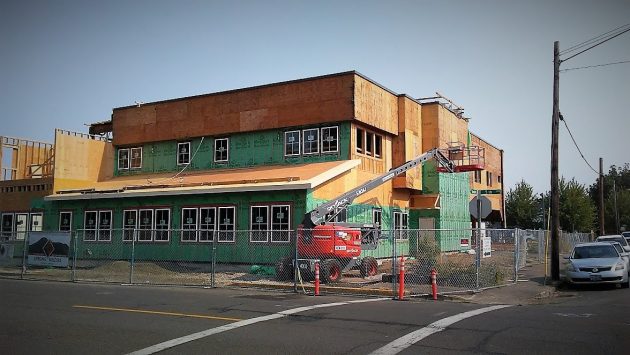 This side of the future ABC House faces Fifth Avenue.


8 responses to “CARA and ABC: Request for siding aid”