Can this truck trap be fixed? 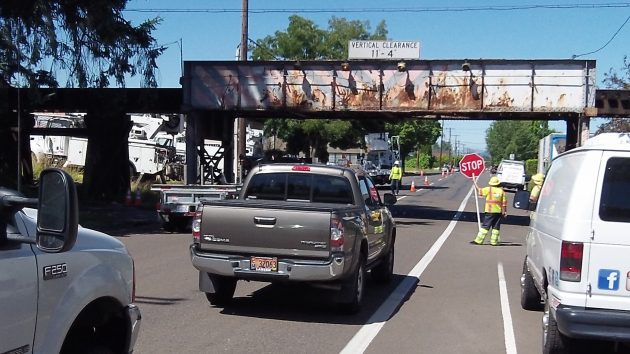 Do you think Albany will do anything else to keep trucks from hitting the railroad overpass on First Avenue? Me neither, but at least the subject came up — briefly, and without resolution — at Wednesday’s meeting of the Central Albany Revitalization Area advisory board.

Mitch Langjahr, a member of the board, brought it up. Trucks have been hitting the bridge for as long as anyone can remember. And recently it’s happened more frequently. Lots of people including Mayor Sharon Konopa think this may be the result of more non-professional drivers unfamiliar with Albany or their vehicles relying on GPS for directions.

When last I wrote about this in June, someone had suggested making the bridge more visible with reflective paint. On Monday, CARA board member Loyd Henion mentioned a system in which a laser beam is directed across the road at a certain height. When broken by a truck, the beam triggers a very loud and highly visible warning to “stop right now,” or words to that effect.

As it happens, the downtown urban renewal plan lists the First Avenue undercrossing as one of its potential projects. With an estimated price tag of $500,000, it’s No. 37 on the list of 51 projects or activities the city council contemplated when the plan was adopted in 2001. But on this one nothing has been done.

The prevailing attitude has been, pretty much, that there already is a detour for trucks, not to mention an array of warning chains dangling across the street upstream of the bridge. And what can you do if drivers ignore all that?

But the fact is that this overpass is a serious departure from the norm. The Federal Highway Administration says the minimum clearance for bridges on collectors and local streets is 14 feet. Trucks generally are no taller than 13-6. This overpass cuts them off if they are higher than 11-4.

Professional truckers know how to avoid such trouble spots. But maybe not, in the words of Councilman Rich Kellum, some guy driving a big rental helping his daughter move. And maybe not the Sunday driver of a motor home with all kinds of stuff on the roof.

Lowering the street some more is not the answer. Councilman Floyd Collins, a former public works director, says doing so would put nearby shops out of business by cutting off their driveways. But something should be done, something that involves paint and an automated warning system that drivers can’t ignore.

So far, nobody has gotten seriously hurt. But who knows how long “so far” lasts? (hh)

Note: The original version of this story had this meeting taking pace Monday. It was on Wednesday, of course. 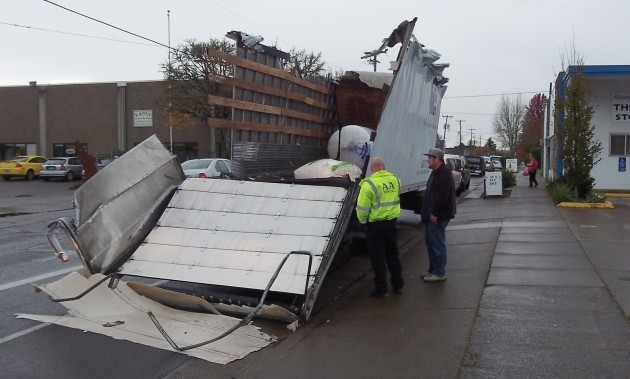 This truck was ripped open on First Avenue in November 2014.


7 responses to “Can this truck trap be fixed?”