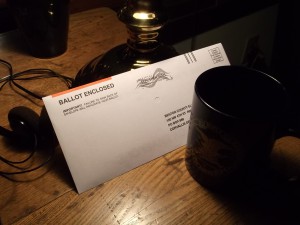 My election is over. As far as I’m concerned, the candidates and the campaign committees can stop now. They can quit running TV ads. They can quit calling. My ballot has been filled out. It’s been stuck in its “secrecy” envelope and sealed, and it’s ready to be dropped in the nearest drop county box. (That’s at Ray’s Food Store in the North Albany Village shopping center, in case you were wondering.)

Actually, the campaigners could have quit a long time ago as far as I’m concerned. I don’t need campaigns to know what I want in public policy. Or whom I want to hold public office. For all I care, the candidates could announce their intentions before the filing date and then sit back, or go about their regular business. They would not have to spend a dime to impress me or to win me over. I’m guessing there are many citizens like me in this regard. They know what they are for and what they are against. They don’t need to be persuaded. They don’t need to be bought.

Trouble is that we don’t usually decide elections. No, in our closely divided country, elections are decided by the undecided. These are the people who can be persuaded. The ones who form an impression because of ads they see on TV. The ones impressed by signs on people’s lawns.

So if you don’t like millions of dollars being spent on campaigns, if you think our politics is polluted by cash, don’t blame me. Don’t blame citizens who pay attention and know what they want. No, the blame for expensive campaigns falls on that small number among us who can easily be swayed. (hh)