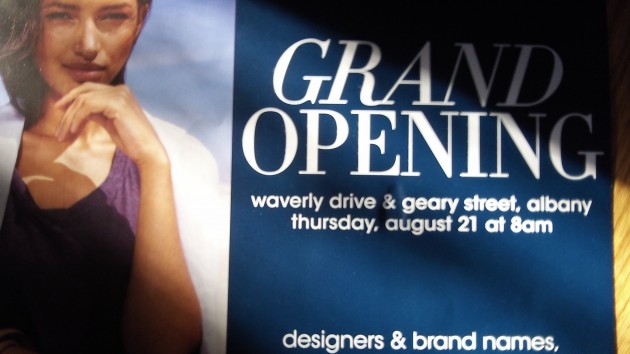 Exactly where is “Waverly Drive & Geary Street” in Albany?

In the business department, there are some items to take note of around Albany. A nationwide chain posed a small puzzle before opening a local branch in the city’s commercial center this week, and on a smaller scale, storefronts are being put to new use in the old part of downtown as well.

— Sunday’s paper included a one-page glossy insert, almost but not quite lost in the pile or other ads, announcing the grand opening of Marshalls this Thursday, Aug. 21. But if you don’t know where it is, or that it occupies part of the remodeled former GI Joe’s on the south side of 14th Avenue, near Safeway, the ad might have you scratching your head. “Waverly Drive & Geary Street” is the location listed in the ad. These are parallel north-south streets, and you may recall from elementary geometry that parallel lines meet only in infinity, if ever. (Waverly and Geary come together only at the north and south poles.) The new branch of this discount chain fills a space that had been empty for a few years. The rest of the building is to be a Big Lots. No word when that will open. 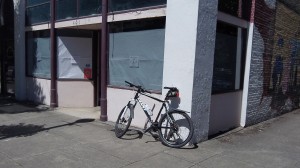 A café named “Sirene” expects to open here in September.

— Downtown, one block of First Avenue between Ferry and Washington is showing signs of new life. At the corner of Ferry, workers have been busy for at least a couple of weeks remodeling the inside of what used to be a shop dealing in sewing machines and vacuums. It’s going to be a café, according to the sign on the window when I parked my bike there a couple of weekends ago. The sign says the place, Sirene, hopes to open in September. A couple doors to the west, a dental office has opened and is acceopting new patients, again according to signs in the window. Remarkably, neither the café nor the Advantage Dental Clinic asked for downtown urban renewal help to get started. (Also getting ready to open on that block is the Natty Dresser, a men’s store, which did get approval for $10,000 of urban renewal assistance toward remodeling the storefront.)

— Over on Second Avenue, meanwhile, the empty storefront at 208 Second is still waiting to be redone to house the famous Novak’s Hungarian Restaurant, whose owners want to move it there from their rented space in the shopping complex that now has the new Marshalls. Karen Novak, one of the principals, hopes that  bank financing for the project will finally come through this week. Back in April, the Central Albany Revitalization Area advisory board approved a $200,000 forgivable loan for the project, then estimated to cost a total of $800,000. Two dozen employees of the restaurant met in the empty storefront for a staff meeting in July, and Novak’s reported on Facebook that all of them easily found parking nearby. Parking had been one of the concerns in the proposed new site. Karen invited the public to check Novak’s Facebook page for updates on the move. (hh)