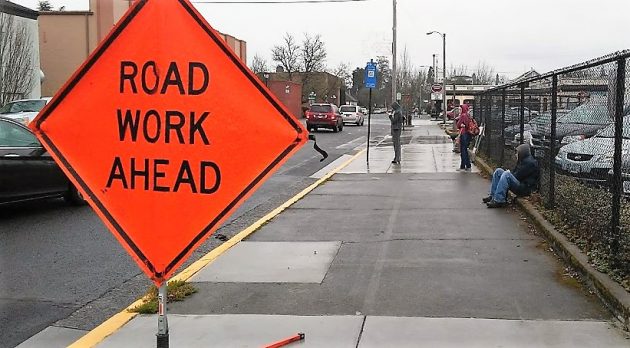 In Monday’s afternoon drizzle, Albany Transit passengers wait for the bus on Washington Street in front of the post office.

This downtown bus stop of the Albany Transit System is only temporary, but passengers who wait there probably wouldn’t mind the benches and roof the old one had.

The former bus shelter on Broadalbin — complete with a roof and a place to sit — had to be closed in August because the $8.5 million downtown streetscape project widened the sidewalk and narrowed the street there.

On a bike ride Monday afternoon, I saw passengers waiting in the light rain at the replacement stop at the post office on Washington Street. This made me wonder how plans for a temporary shelter there were coming along.

“We are working on plans to install a shelter there,” emailed Chris Bailey, public works director for operations. And what’s holding it up? “The engineers are evaluating the concrete, and I believe it may have to be pulled up and repoured because it is not thick enough for the shelter anchors to hold. If I hear more about the schedule for its installation, I will let you know.”

I would have thought a bus shelter with a roof and steel posts would be heavy enough that it could just sit there and anchoring it would be no big deal. But then again, that’s the kind of thing a non-engineer might think, one that didn’t have to worry about somebody getting hurt in the unlikely event a west wind comes up and carries the shelter into a moving car on the street.

When the streetscape project is finished later this year (with any luck), the city plans to put bus stops on Ellsworth and Lyon Streets to replace the temporary one on Washington.

No word on how long the engineering evaluation of the sidewalk concrete will take. So it’s not clear when people will be able to step out of the rain as they wait for the No. 3 bus. (hh)