Budget message: You can check it out 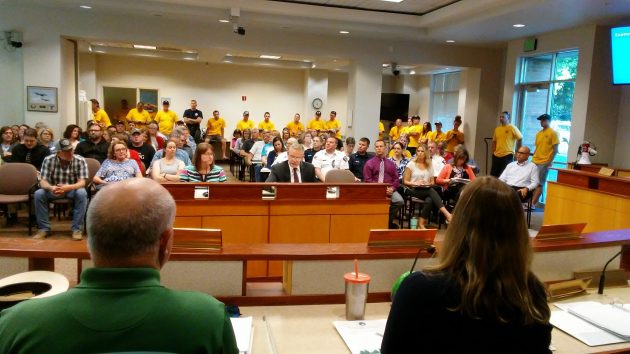 Firefighters’ union members in yellow shirts stand in back as Manager Peter Troedsson, at the podium, reads his budget message Tuesday.

Budget meetings aren’t anybody’s idea of a good time. But Tuesday’s session in the Albany council chamber was interesting, mainly for the long and extraordinarily detailed message delivered by City Manager Peter Troedsson.

It’s worth listening to in its entirety, and you can do so. The YouTube video is available on the city’s website. For nearly an hour and a half, Troedsson described Albany’s varied municipal programs and the money angles they involve. The common theme: There’s a structural problem that can’t be solved by any one-time infusion of cash, such as from grants or selling city property.

The problem is that payroll expenses, including the public pension system and health insurance, are growing faster than property tax income and other revenue, and the only way to solve the problem for the long run is to reduce staffing — and thus service to the public — or raise taxes and fees.

The budget proposed for 2019-21 — the first plan covering a biennium rather than just one year — envisions reductions in the number of employees in the police and fire departments as well as parks and recreation and the libraries.

In parks, the cutbacks would close the the Maple Lawn preschool, and several parents told the budget committee Tuesday why that would be a mistake. Troedsson said the city is contacting other entities about possibly taking over the preschool program.

Council member Bessie Johnson spoke up at the end, urging the budget committee to not just sit there but to come up with alternatives to the various cutbacks. For instance, she had asked for and received information on what it costs to run the Carnegie library downtown.  (It’s about $210,000 a year.) And she wonders why the city needs two libraries.

She also had asked for a list and map of city-owned real estate. The list is long, but on the map it appears all the big properties are parks or designated open space. They include the East Thornton Lake Natural Area, which the city bought for more than $2 million but can’t develop, let alone maintain, because of cutbacks in the already short-staffed parks department.

The budget committee is going to decide whether to endorse the $345 million two-year budget as presented or to make changes. There are three more budget sessions planned. The next one is at 6:30 p.m. Thursday at City Hall. (hh)


8 responses to “Budget message: You can check it out”