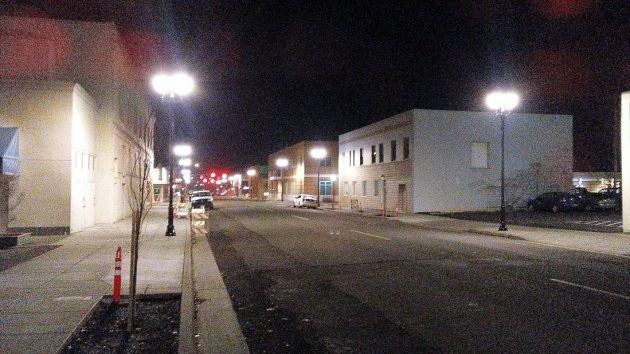 The new lights being installed downtown are certainly bright, even if they illuminate only an empty street as, in this case, three blocks of Third Avenue.

Named for the shape of the fixtures, the new “double acorn” street lights are part of the $8.5 million downtown streetscape improvement project funded by CARA, the Central Albany Revitalization Area, an urban renewal district and program. The lights on Third were the first to be turned on.

In his weekly summary of activities for the Albany council, City Manager Peter Troedsson says the lights on Third give the street a safe and welcoming feel. Lights on Second should be turned on soon, he adds.

These segments of Second and Third will get another set of illumination. They will get “catenary lights,” single fixtures suspended over the middle of the street from cables strung from posts on both sides. There will be two such lights per block.

When the CARA board discussed this in 2015, members decided against the catenary lights as unnecessary. But the lights were added back later as the project was expanded and refined, and the board did not object.

As for the overall streetscape work, the “Big Dig” that has disrupted parts of downtown since the spring, Troedsson told councilors: “The project is on pace to come in under budget, and the contractor is on track to meet the schedule shared in the November construction notice.”

That notice says all the remaining work should be complete by the spring of 2018, except for the final paving of the Highway 20 streets (Ellsworth and Lyon), which is planned for the summer of ’18.

As for the acorn lights that have now been installed and energized, in earlier stories I doubted whether they would be bright enough, and I implied they looked too tall. Both opinions were wrong. They are the right height to give plenty of light down below, and they certainly are bright enough. (hh) 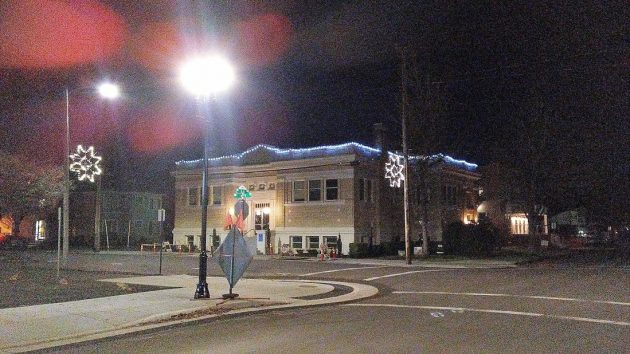 In the background, the Carnegie Public Library at Third Avenue and Ferry Street.