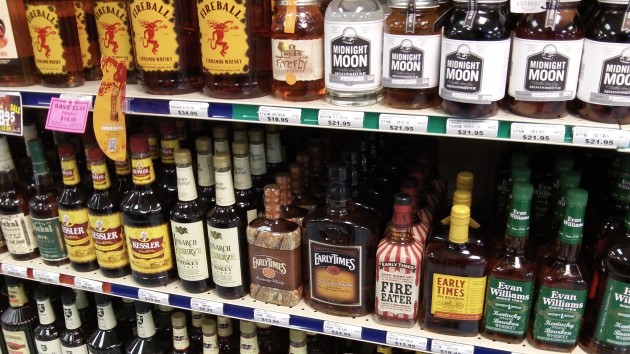 Yes, this is what Oregon needed; this is what was missing:  An online site for finding booze, complete with pictures, descriptions, prices, hours of the nearest liquor store and even maps if you’re too disoriented to remember the address from the last time you went.

I had been waiting for a chance to use a snapshot of some liquor shelves, waiting for a topic where the shot might serve as an illustration. As you can see, the wait is over. It ended when the Oregon Liquor Control Commission issued a press release Friday with the happy news that “OregonLiquorSearch.com is picture perfect.”

That was the headline on a story from OLCC headquarters that began: “To help make shopping easier for customers, the Oregon Liquor Control Commission has added more than 1,100 pictures of distilled spirits products to the online search tool, OregonLiquorSearch.com.”

The search tool had been around since 2009 and lacked only pictures. And now the pictures have been supplied. Progress!

Why do we need pictures? Because, says the OLCC, “the photos help customers know if the product they see is the same one they want, eliminating the guesswork.”

The announcement quoted Steven Marks, the state liquor agency’s executive director: “We live in an age where most things are online and text is often replaced by pictures. OregonLiquorSearch is a great tool to have bookmarked on your phone or tablet so you have it with you when you are on vacation or just out running errands.”

And there’s more good news: “OLCC carries more than 2,000 special order products in addition to approximately 1,900 regularly stocked items. The agency expects to have photos of all the products added in time for the winter holidays. Photos on the site will also be updated as new products are introduced.”

There was a time when we walked into a liquor store, studied what was there, picked something, paid for it and left. That was too simple. Now we can look at pictures on our smartphones to act as a guide.

How do we know civilization has slumped another notch? When drinkers need pictures to guide them in buying booze. (hh)