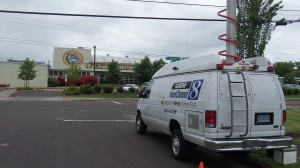 A television news van at West Albany High on Tuesday.

Albany got into the national news over the Memorial Day weekend. Let us hope we never have this kind of dubious distinction again.

A friend back east told me she heard the news of the arrest of an Albany high school student for planning to attack his school. Her own town, in Maryland, had been in the news a few weeks before because one of relatives of the Boston Marathon bombers lives there and was giving interviews.

The Albany story began on May 23, when police, reportedly acting on a call to the department from another student’s mother, arrested 17-year-old Grant Alan Acord. He was charged with planning to attack West Albany High School, where he was a junior, with home-made bombs. The police said they found bombs and material to make them under the floorboards of his room.

Young Acord, whose mother says he suffers from a rare form of obsessive-compulsive disorder, has been arraigned. It would be wrong for public opinion to form a judgment before the judicial process reaches its end. The public doesn’t know enough about exactly what happened and what if anything the student, charged as an adult, had planned. It’s one thing to talk and write notes and draw diagrams, it’s another to mean it and to act on those “plans.”

According to reports so far, he talked and went online about his plan to a number of people. Evidently secrecy was not part of his plan, and whether he intended to go through with it and was capable of doing so, the public does not  know. (hh)