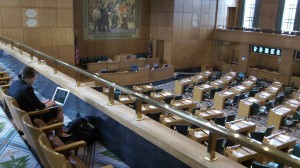 The Oregon House before much of anything is going on,

(As  always, for a reaction, see below.)

On the occasion of President Obama’s second inauguration, it may be fitting to call attention to House Bill 2405, introduced in the current session of the Oregon legislature by Rep. Andy Olson of Albany. Olson introduced the measure at the request of a voter in House District 15, which he represents. At first glance, the bill seems like a needless reminder of the so-called “birther” argument concerning the president. But on second thought, it would also make sure that this argument won’t be repeated in future presidential campaigns.

The bill is simple. It says that before the Oregon secretary of state can place the names of presidential candidates on the ballot in the primaries, the candidates or their parties must present evidence that they are qualified under Article II, Section 1 of the U.S. Constitution. In short, candidates would have to prove that they’re natural-born U.S. citizens.

Prove it how? The bill says they would have to present an “original long form birth certificate” that gives the details of the candidates’ birth including place and date, hospital, and names of attending doctors and witnesses. Candidates also would have to give a sworn statement that they’ve never held dual citizenship and that their allegiance is to the United States alone.

Now that may seem like unnecessary paperwork. But then again, we now require something along those lines even of applicants for Oregon driver’s licenses. (The requirement for driver’s licenses is overkill and ought to be repealed, but we still have it, so it can serve to bolster the argument being made here.) If we require proof of legal residency just to be able to drive on Oregon roads, what’s wrong with asking for proof of eligibility of men and women who aspire to preside over the federal government?

Presidents Kennedy, Johnson, Nixon, Ford, Carter, Reagan, Bush 1 and 2, and Clinton could have easily met the requirement. Obama could have met it too, and if he had, some people in the country could have saved themselves a whole lot of needless agitation over the last four years. (hh)

From Gary Wolcott: Yes. Obama could have proved it easily and saved everyone a lot of time and money. But he gains nothing doing that and it’s an advantage to have the public focused on that and not on what a lousy job he was then — and is now — doing as president. It takes the eye off the disastrous ObamaCare, the lack of an energy policy, tax reform, economic growth and jobs during the two years the Dems and the president had congressional majority.