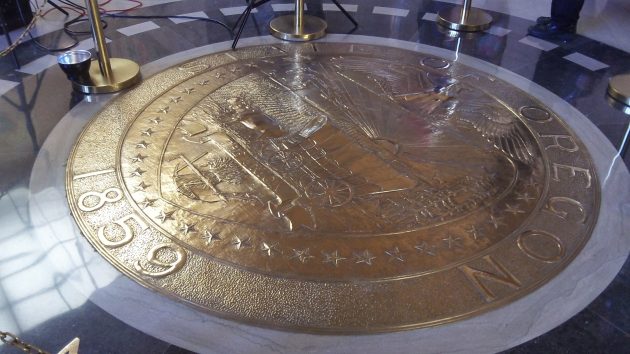 The state seal at the Capitol in Salem, where tax hikes are proposed.

The same Oregon legislators who were thinking of taxing coffee and old cars also have visions of sharply raising the property tax, the most unfair tax of all because it is only faintly related to the ability to pay. And their proposal includes a sneaky hunk of bait intended to make voters bite.

The House Revenue Committee has before it a constitutional amendment, House Joint Resolution 1, that would shatter the property tax limits enacted with Ballot Measure 5 in 1990 and Measure 50 in 1997. The Oregon Tax Foundation says the changes proposed in this bill would jack up the tax by more than $3,000 a year for the average property.

Measure 50 rolled back taxable values and then limited their annual growth to 3 percent. The proposed amendment would cancel that limitation and assess all properties at their “real market value,” which in most cases is substantially higher than the current assessed value.

Measure 50 also established permanent tax rates for all taxing districts. The amendment would allow cities, counties and districts to raise those rates every 10 years if the local voters approve. As people with a long memory know, the requirement for local voters’ approval is not effective in keeping taxes down. The cry goes up that it’s for the kids or for public safety, and resistance often crumbles.

In 1990, Measure 5 established maximum local tax rates for the operation of taxing districts (not for paying off debt, though). The pending amendment would increase those limits, from $5 to $6 per thousand dollars of valuation for schools, and from $10 to $11 per thousand for general government.

The bait for voters to swallow all this is a possible homestead exemption from property taxes. But the amendment is written in a sneaky way. It does not actually enact an exemption. It just “directs” the next legislature to pass one. So the exemption, if one is enacted at all, might well cover only a tiny portion of a home’s value, still leaving the homeowner with a massive tax hike.

If the amendment clears the legislature, it will go to Oregon voters during “a special election held throughout the state on the same date as the next primary election.” Unless the convoluted wording hides some kind of trick, that election would be in May 2018. If voters pass it then, we can all count on property taxes rising to ruinous levels once again. (hh)

This story has been edited to include the bill number, HJR 1, in the second paragraph.