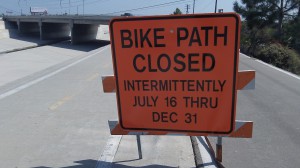 When it comes to bike trails, we in Oregon could learn something from transportation authorities in Southern California. Here’s a look at part of the Santa Ana River Trail, part of an extensive bike path system that goes on for miles and miles. According to a website on the SART, it was designated as a transportation artery when freeway construction would have otherwise robbed cyclists of a crucial north-south link in Orange County. One of its features: Underpasses whenever the trail comes to a cross street so bike riders can avoid car traffic and signals. The website complained about a 10 mph speed limit on the path, but I didn’t see any signs to that effect, and other riders observed no such limit either. (hh)

Reader Jim Clausen pointed out  (below) hat the SART was not “built” as a bikeway, as my original posting mistakenly said. It was designated as such, and I’ve made the correction. Thanks, Jim. (hh)

From Jim Clausen: You’ve been sold a bill of goods. The “underpasses” you referred to have been there forever. I grew up in California. I rode my bicycle in those river beds as far back as 50 years ago. They built them the same way then as they do now.

The “underpasses” were for service vehicles while doing construction or maintenance. During rainy season, the water rushing through the river beds would often leave debris that clogged drainage ways or pile up on the riverbed itself. The service trucks kept these areas clear to avoid overspills and flooding. The trucks drove along the top of the beds, allowing them a good view, and when they got to a bridge they’d use the ramps (or “underpasses”).
I’m sure Orange County has spruced them up some, painting lines, arrows, directional signs etc. (after all, they have to find creative and never-ending ways to spend our tax dollars). But for SART to say that the “underpasses” were “built as a transportation artery when freeway construction would have otherwise robbed cyclists of a crucial north-south link in Orange County” is deceptive at best, an out -and-out lie at worst since they’ve been there for decades.
Like I said, Hasso, I was using those “underpasses 50 years ago. We, and other families, used to have family outings riding along the riverbed for hours (and miles). We figured out how to use the ramps all by ourselves! We didn’t need paint on the ground, arrows, speed limits, or navigational devices and big government telling us how to use the riverbed. You’ve been had, Hasso, by a governmental agency attempting to justify extra and unneeded expenses.
Posted in: Commentary, Videos
Tags: Orange County, Santa Ana River Trail