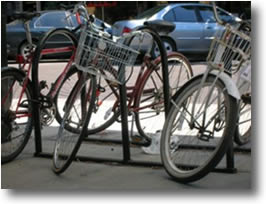 What would be wrong with the state charging bicyclists a fee for the use of public roads? After all, the state charges plenty in connection with cars and trucks.

Because bikes are thought to get a free ride, there’s long been tension on Oregon roads between motor traffic and bicycles, which also count as vehicles under the law. Some motorists resent the presence of bike riders because sometimes they have to wait a few seconds to go around them in traffic. And then there are all those bike lanes and paths paid for with highway funds from the gas tax and vehicle registrations. Why should bike riders get to use those faclities for free?

Now state Sen. Larry George, a Republican from Sherwood, has proposed a bill to impose a $10 annual registration fee on bikes used on public roads, with a $25 fine for not signing up and paying the fee. The revenue would be used for bike facilities. Well, why not?

I’ll tell you why not. Most adults riding bicycles also own and drive cars, so with their registration and license fees they already do pay into the highway fund. Homeless and other poor people riding bikes out of necessity don’t need the additional hassle of an annual fee.

Oregon has had the bike bill since 1971. It was authored by a Republican, by the way, the late Donald L. Stathos of Medford. It generally requires at least 1 percent of highway project costs to be spent on bikeways and such. And it’s worked well for more than 40 years, so in the interest of keeping things simple, there’s no reason to complicate matters with a law on mandatory bike registrations and fees. (hh)

Gene Frazzini, via Facebook: Yes, the bill is impractical and should not be implemented. However: 1) I don’t resent bike riders because they slow me down; I resent them for running red lights and cutting in front of my car. 2) You state that since I own a car and pay into the highway fund, I shouldn’t have to pay again for my bicycle. If that’s the case, I shouldn’t have to pay again for my pick-up truck. 3) You say poor people riding bikes out of necessity shouldn’t have to pay an annual fee. Are you saying poor people who must drive cars to get to work should not have to pay registration and license fees? Again, I agree that this is a bad bill but not for the reasons you mention. It is a bad bill because it would not bring in enough revenue to even begin to cover the cost to enforce it.