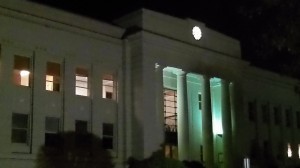 Where property taxes are collected and distributed: the county courthouse.

There is no end to the complaints about Oregon’s tax system, or to the proposals for fixing it. The latest comes from the Portland City Club, where a committee has written a report with recommendations for fixing the property tax. But there’s reason to be wary of so-called reforms.
The property tax system is a convoluted mess. There’s no question about that. But the City Club’s recommendation would trade current problems for new ones — or actually old ones. The club’s recommendation is to have the voters repeal Measure 5 and 50, which limited the property tax, and to return to a “levy-based system.”
The details of the recommendation are not entirely clear because the full report is not coming out until tomorrow, but a levy-based system is what we had a generation ago. School districts had to go out to the voters for a levy every year until voters finally okayed — usually in a special election with low turnout — a tax increase to allow the local schools to operate for another year. Because the alternative of shutting down schools was unacceptable, the result was a steadily rising property tax burden that threatened to kick people out of their homes. That’s why voters in 1990 adopted Measure 5, and why they adopted Measure 47 in 1996. (It was repassed in amended form as Measure 50 in 1997 because the original didn’t work.)
It’s true that the system has caused problems, but it has worked to keep property taxes from going through the roof. That’s why voters should be very skeptical of any plan to lift the tax limits we have. (hh)