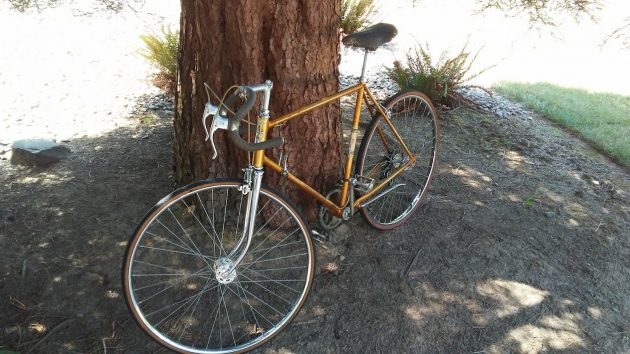 Neither this antique Schwinn nor any other bike will be used on the Albany-Corvallis Bikeway in any foreseeable timeframe.

It’s hard to say whether the long-planned but never built Albany-Corvallis Bikeway in Benton County is still a possibility, especially now that the Albany portion has to be reconsidered.

The North Albany segment, from Hickory Street to Scenic Drive, was intended to go under a trestle where the Union Pacific Railroad’s Toledo Branch line approaches Thornton Lake Road.

For months Benton County had been trying to secure the railroad’s permission for this underpass, and I was wondering about progress. On Tuesday, Public Works Director Gary Stockhoff told me the UP had said no.

“We will not be able to secure a permit to take the path under an existing trestle,” he wrote in an email, “so we are back to the drawing board on a route to get us to Scenic or thereabouts.”

I asked the Union Pacific for the reason. “Unfortunately,” corporate spokesman Tim McMahan replied, “the trail design plan did not meet the engineering and structural requirements federally regulated railroads use to assure pedestrians, cyclists and others can safely travel under rail infrastructure.”

Originally ODOT, in charge of constructing the North Albany segment, had planned to have it built in 2020.

In July 2019, Benton County sponsored a neighborhood meeting about the project at North Albany Middle School. Several property owners said they were worried about the bikeway, part of which would have gone through or past their backyards along the rail line before crossing under the track to Thornton Lake Road.

What about the rest of the roughly 10-mile route?

Here’s the update from Stockhoff: “The southern segment, which we refer to as the Conifer to Merloy section is progressing. Both ODOT and the County are moving forward with plan development, and securing the (right of way) needed to facilitate the path. I believe the current plan for ODOT calls for this segment to be under construction in 2023.”

As for the longest segment, from Scenic Drive west along first the north side of Highway 20 and then the other, nothing’s been done to develop the project since planning stopped in November 2017.

ODOT is getting ready to make safety improvements on Highway 20, at Independence Highway and Granger Road. If the bikeway ever goes forward, Stockhoff says sufficient right of way has been secured so the junctions would not have to be redone.

The idea of a bikeway linking Albany and Corvallis was advanced some 15 years ago by Linda Modrell, then a Benton County commissioner. Making it real has been more difficult than building the interstate highway system.

One blow came in February 2015, when the Benton County Planning Commission denied a conditional use permit to allow the bikeway to be built along the UP track on land zoned exclusively for farming.

So if you want to ride a bike from one of these towns to the other you can continue to brave traffic on Highway 20. Or you can take the scenic route Linn County has designated on the other side of the Willamette, on Riverside Drive. (hh)

The story has been edited to add the response from Union Pacific.