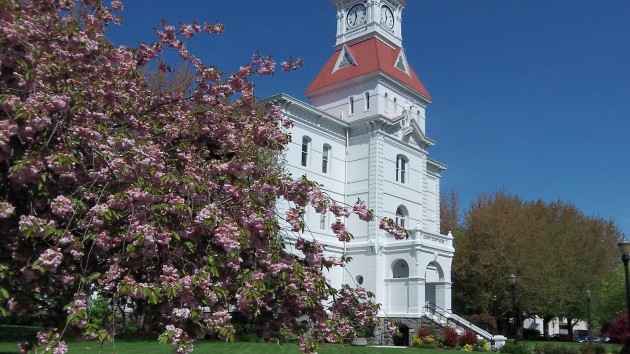 Imagine the predicament of the Benton County Board of Commissioners. They’re faced with deciding what to with the historic county courthouse, a lovely landmark that is much admired. But it is also unsafe in an earthquake and would cost an arm and a leg to shore up.

In January the commissioners received an engineers’ analysis that said the courthouse might collapse in a severe earthquake. Preventing this would probably cost upward of $10 million. What’s more, while the refit would prevent the collapse and allow people to escape, a severe quake would do enough damage that the building could no longer be used. Such a quake is very rare – the report said something about a “return period” of 975 years – but still.

The courthouse dates from 1889 and was renovated in 1978. It’s the oldest Oregon courthouse still in use. It houses the state courts for Benton County and some county offices including Elections. The bearing walls from the first floor up are made of unreinforced brick.

The county’s consultants said that to allow people inside to escape in a moderate earthquake – a seismic event with a “return period” of 225 years — would require fixes costing an estimated $6.7 million, but the building probably could not be occupied again until repairs were finished. Shoring it up so that it could continue to be used right away would cost around $9.1 million.

And by the way, the refit would take one to two years and the courts and other offices would have to be housed elsewhere during the construction. The costs of that would be on top of the structural work.

Put yourself in the commissioners’ shoes. What would you do? Would you count on the fact that the building has stood for 127 years without falling down and hope the big earthquake we’re always being warned about is still a long way off?

On March 30, the county plans to have a meeting with courthouse employees and fill them in on what the consulting engineers found. Having looked at the report and especially its pictures, courthouse workers might leave that meeting with a certain amount of justified unease. (You can read the report yourself at https://www.co.benton.or.us/publicworks/page/courthouse.)

There are other things to consider. How long before the courthouse will have to be replaced anyway just because it’s too small for current and future needs? What about the problems with the old jail? Should the county consider a new court and justice facility-cum-jail elsewhere? If so, what happens to the old building? And regardless of what is decided or proposed, how to get the money for any of it?

While the subject winds its way through all the Corvallis channels and a proposed solution is eventually reached, you may hope you don’t get called for jury duty in that building, no matter how picturesque it looks. (hh)