Back to dirt streets and mud? 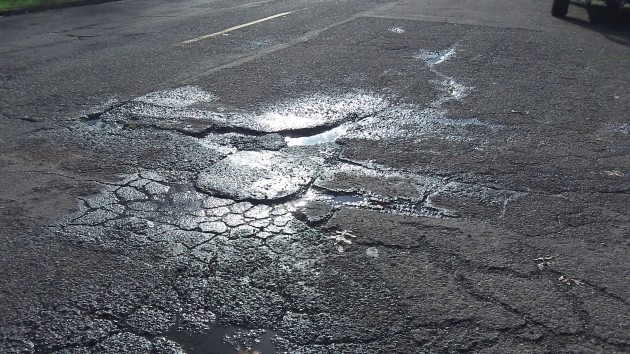 Too many old streets look like this when it rains.

In a video the other day I reported on the crumbling pavement on Albany’s Fifth Avenue S.E., and you and I together were wondering why that and many other streets in the old part of town haven’t been fixed. The answer is not that there isn’t any money. It’s just that the money is spent on other important things related to streets. And now the situation may get worse as the city manager has proposed setting aside some street money to backfill the general fund.

I raised the question of street repairs with Public Works Director Mark Shepard, who now wears an additional hat as community development director. “Albany does not have enough funding available to address all of our street needs,” he replied. What money is available is usually spent on the routes that carry the most traffic, which he figures “provides the biggest benefit to the community as a whole.” 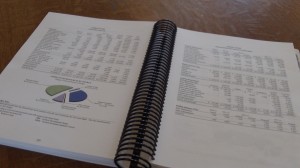 Checking the fine print in the city budge.

With nothing better to do, I snagged a copy of the city budget at the downtown library and spent 20 minutes looking over the street fund. In page after page, the budget makes your eyes swim with numbers that summarize the year’s plan for street funding from all kinds of angles. The long and short of it is that city resources for streets this budget year, 2013-14, add up to $12.8 million, including reserves from systems development charges on new buildings.

As for actual income, the biggest item is the state gas tax with $2.8 million. The city also expects just under $2 million in surface transportation funds (federal, I assume), and just under $1 million from a surcharge on city water and sewer bills as an “in lieu of franchise fee.”

Twelve million in resources sounds like a lot of money. But much of it is spent on or saved for big projects. For example, the city council has just awarded a $1.8 million contract for rebuilding Main Street including a roundabout at Salem and Third Avenues. Another $2.9 million is budgeted for rebuilding North Albany Road. That project has been pushed back to 2015, but the money for it is being saved. (It’ll cost more than the amount shown in the budget.) 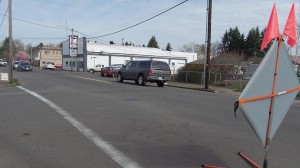 Main Street will get a roundabout right about here.

Here are a few of the many other things the street fund is called on to support: Maintenance (everything from sweeping to pothole patching and wintertime sanding), public works administration and engineering, storm water operations and bridge maintenance. And don’t forget planning for the Corvallis-Albany bike path.

Nothing in the budget points to resurfacing streets in the residential districts of historic Albany, and no change in priorities is in sight. The major capital projects that chew up millions (North Albany Road and Main Street) must be done to prevent gridlock as traffic grows.

There is no chance for more money. On the contrary, City Manager Wes Hare told the council and members of the budget committee he may propose diverting about half a million dollars of the street franchise fees to the general fund’s contingency in 2014-15. The problem, he says, is that personnel costs are growing faster than the city’s income.

In short, there is no plan to do anything substantial about the potholed streets. Twenty or 30 years down the road those streets will require complete reconstruction. The bill will be huge. If nobody pays it, the job won’t get done and the historic districts can look forward to ending their days the way they began 150 years ago, with streets of dirt and mud. (hh)


One response to “Back to dirt streets and mud?”