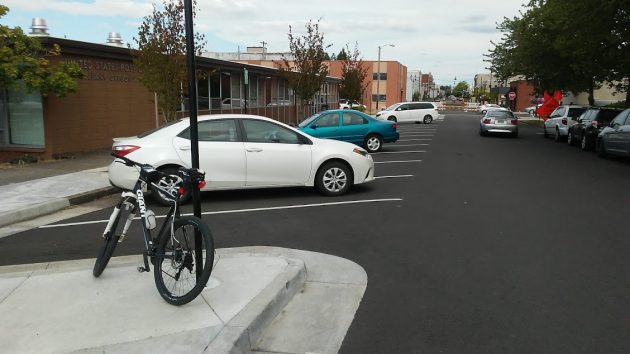 On Second Avenue outside the Albany Post Office at 4:10 p.m. Thursday.

One day after the Albany City Council acknowledged complaints about the left-side, back-in angled parking outside the post office, I went there hoping to document that drivers had finally become accustomed to the layout. As you can see, that’s not what I found.

Councilwoman Bessie Johnson touched off a brief discussion toward the end of the council’s two-hour meeting Wednesday night. She said she was getting many complaints about the angled parking outside the post office’s Second Avenue side.

Councilman Dick Olsen said he had observed the situation when he was volunteering at the Monteith House across the street.

Mayor Sharon Konopa said that in Seattle recently, she saw angled back-in parking all over the place. She didn’t say whether it was on the drivers’ left side, as it is on Second. She thought the problem on Second was that the spaces were too narrow.

In Councilman Rich Kellum’s opinion, the problem may be that too many drivers don’t understand that Second is a one-way street going east. They apparently don’t see the signs.

Kellum has a point. Last month I talked to the driver of a big pickup who was parked nose-in. He was from out of town and had found all the spaces in the office’s public lot taken. As he pulled through the packed lot onto Second, he saw empty spaces to his right, turned that way because he saw no reason not to, parked, and waited while his passenger went inside. 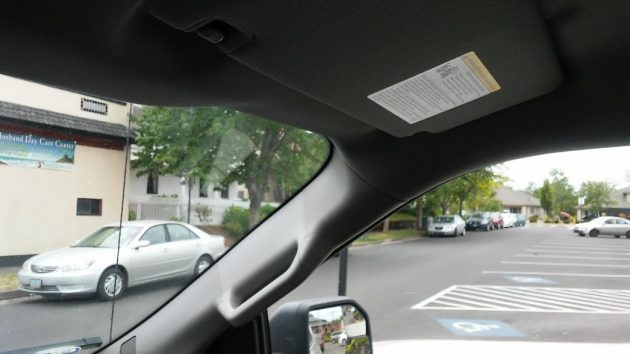 What a pickup driver sees: Parking available on the right. The “wrong way” sign is obscured by his roof.

The angled back-in parking was decreed by the council in 2016 and carried out when streets around the post office were reworked in the winter and spring of 2017. After more than a year, the pattern still causes occasional confusion and consternation.

In front of the Albany Carousel on First Avenue, the city’s angled reverse parking makes sense and has caused, as far as I know, no complaints. That’s because it’s on the right-hand side of a one-way street.

On Second, the city could easily have provided the same number of additional parking spaces by putting in angled head-in parking on the left side. But the council was persuaded by claims that backing in would be safer.

Despite the complaints cited by the council, the city is not about to take the easy way out and restripe the parking spaces  to provide for head-in angled parking.

Instead, Chris Bailey of Public Works told the council Wednesday she’s thinking of bigger “one way” and “wrong way” signs and maybe painting bigger arrows on the pavement.

Which won’t do anything to prevent nose-in parking. Drivers can easily come down the one-way street the proper way, then make a swooping turn to head into one of the angled spaces. As they back out, they turn and then leave in the correct one-way direction. On Wednesday, that is exactly what the van in the background of the top photo did. (hh)