At the Capitol: No action on amendments – Hasso Hering

At the Capitol: No action on amendments 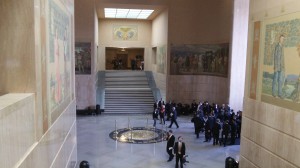 Under the Capitol dome in Salem.

When this session of the Oregon legislature began, some of its members had grand ideas for amendments to the state constitution. So far, though, a little more than midway through the session, none of them looks like it’s headed for the ballot.

The deadline for committee action in the originating chamber of each proposed constitutional amendment was April 18. As near as I can tell, almost none of the ones I looked at this week survived that first hurdle. Among the casualties was, for example, a proposal to change the constitution to allow sobriety checkpoints by the police. Another called for voter registration up through election day.

One would have allowed local option tax levies to exceed the constitutional tax limit and to run for 10 instead of the current five years. And one would raise the taxable value of property to the real market value when it’s sold, instead of it being assessed at a ratio comparable to similar properties.

All that’s on the Senate side. In the House, committees also failed to advance amendments to outlaw the death penalty and a proposal  by Rep. Sara Gelser of Corvallis to allow higher school taxes.

The only amendment that cleared its first hurdle on the way to the ballot was one to guarantee a constitutional right to hunt, trap and fish. Some of these other proposals might still be revived, but for now they look dead. (hh)