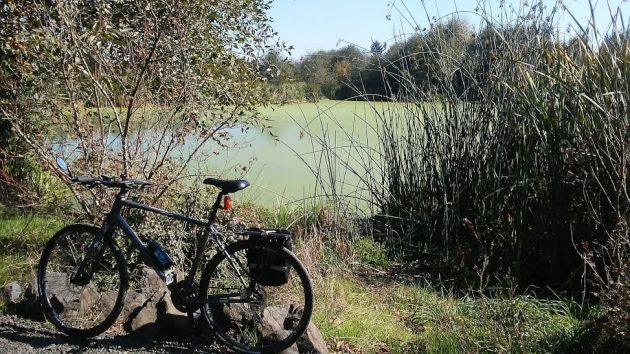 The pond near the entrance to the Talking Water Gardens on Oct. 5.

On June 13, the state Department of Environmental Quality gave the city of Albany 90 days to come up with a plan to stop leaks from Talking Water Gardens. The deadline has passed, but evidently it wasn’t meant to be met.

When I inquired last week, I was told the city was still negotiating with the DEQ.

In its enforcement action last spring, accompanied by a $5,400 penalty, the DEQ asserted that underground seepage of treated wastewater from the Talking Water ponds amounted to an unauthorized discharge. The agency told the city to evaluate options for reducing the leaks and then to submit its plan to stop them.

One way to stop the leaks is to shut down the Talking Water Gardens, constructed at a cost of about $14 million and completed in 2012. That would presumably obligate the city to find some other way to cool the treated wastewater discharged to the Willamette River from the Albany-Millersburg Water Reclamation Facility.

Another way might be to drain the ponds, excavate the soil in which the aquatic pond plants grow, put in an impervious layer — clay, concrete, plastic? — and put the dirt and plants back in.

Another possibility is to persuade the state regulators that the leakage is no big deal and should not be considered an unauthorized point of wastewater discharge. After all, the seepage that is eventually reaching the river has already been treated and comes from ponds holding water going into the river through two authorized diffusers on the bottom of the river.

This is the outcome, as I understand it, that city officials and their Portland lawyers are trying to achieve. It’s the sensible solution. The leaks cause no harm, and stopping them one way or another would likely cost millions. Who would have to pay those millions? That’s not clear, but probably not the DEQ. (hh)


19 responses to “At stake with DEQ: Saving Talking Waters”