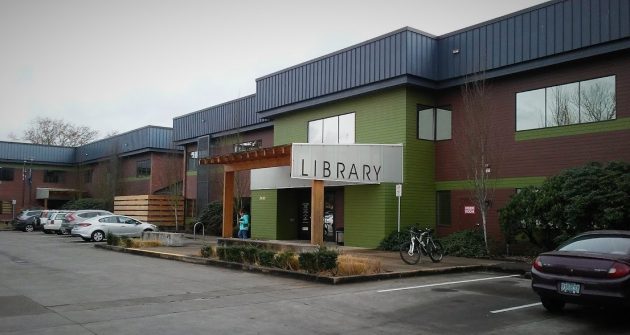 The main branch of the Albany Public Library on Monday. This is the north side, where the paint has faded little.

Ten years after the building opened, the paint colors on the Albany Public Library are no longer an issue. Partly that’s because people have more important things to think about. But mainly it’s because the color scheme looks OK.

The architects had recommended the brown and green to pay tribute to the valley’s farms and woods. But when the paint was fresh in late 2008, the donor who put up $5 million to convert the former insurance headquarters off 14th Avenue into a great main library was more than a little miffed. And in an editorial in the Democrat-Herald that November, I sniffed that the paint colors were “depressing.”

Now, 10 years on, everybody and everything including the paint have mellowed. I look at the building now and if I notice the paint scheme at all, I think it looks just right.

All this comes up now because some of the exterior paint needs refreshing, especially on the south side where sun, wind and weather do their worst. I first learned about this from the Nov. 27 minutes of the library board. One of the board members said patrons had noticed that the paint was fading. The minutes have Library Director Ed Gallagher telling the board that new paint is scheduled for spring. “He explained the original color scheme and the corresponding negative comments. There is a possibility to change the colors.”

When I talked with Gallagher Monday, I got the impression he’s now leaning toward just refreshing the colors that are there, a job he estimates can be done for less than $30,000.

He also has another idea, which he also shared with the board in November. One windowless wall of the building on the east side would lend itself to a big mural, colorful and possibly bilingual — something that would celebrate what the library means in the culture of the town. He’s looking for help in getting that concept further along.

Having moved from across the street, the main Albany library reopened in the remodeled building on March 2, 2009. Every time I go in there, it is busy. With everything it offers — media, computers, meeting rooms, educational and entertaining programs for young and old, a quiet place for students to do homework or research, and yes, tons and tons of books — the Albany library is a wonderful place.

And the outside paint? Who cares? (hh)

This story has been edited to correct the dollar amount that a donor gave to create this library.

The library’s south side. The paint may be faded, but no one complains about the colors any more.


13 responses to “At main library, paint flap is long forgotten”